respelling of Old English hw- attested from 11c., but not the common form until after c. 1400. It represents PIE *kw-; in German reduced to simple w-, in Scandinavian as hv-, kv-, or v-.

It also was added unetymologically to some borrowed words (whisk, whiskey) and some native words formerly spelled with simple w- or h- (whole, whore). In the 15c. flowering of its use it also threatened to change the spelling of hot, home and many more. In northern English 16c.-18c., sometimes altered to quh- (see Q). Proper pronunciation has been much in dispute in educated speech.

It forms all or part of: caress; charity; cherish; Kama Sutra; whore; whoredom.

"female genitalia," also "sex with a woman; woman regarded as a sex object," c. 1910, a word of uncertain origin.  Shortened form poon is recorded by 1969.

Probably via New Orleans Creole, from French putain "prostitute," from Old French pute "whore" (cognate with Spanish and Provençal puta), probably from Vulgar Latin *puttus "girl" (source of Old Italian putta "girl"), from Latin putus (originally "pure, bright, splendid"). But also possibly from or influenced by Old French put, from Latin putidus "stinking" on notion of the "foulness" of harlotry [Buck], or for more literal reasons (among the 16c.-17c. slang terms for "whore" in English were polecat, which might also be a pun, and fling-stink).

Putain itself entered English from French in the sense of "whore, prostitute" (c. 1300), mostly in the phrase fitz a putain "whoreson, son of a whore." Putage in old legal language meant "prostitution" (late 15c.).

This manne can litle skyl ... to saue himself harmlesse from the perilous accidentes of this world, keping ye wulf from the doore (as they cal it). ["The Institution of a Gentleman," 1555]

Probably extinct in England from the end of the 15th century; in Scotland from the early 18th. Wolves as a symbol of lust are ancient, such as Roman slang lupa "whore," literally "she-wolf" (preserved in Spanish loba, Italian lupa, French louve). The equation of "wolf" and "prostitute, sexually voracious female" persisted into 12c., but by Elizabethan times wolves had become primarily symbolic of male lust. The specific use of wolf for "sexually aggressive male" first recorded 1847; wolf-whistle attested by 1945, American English, at first associated with sailors. The image of a wolf in sheep's skin is attested from c. 1400. See here for a discussion of "wolf" in Indo-European history. The wolf-spider so called for prowling and leaping on its prey rather than waiting in a web. 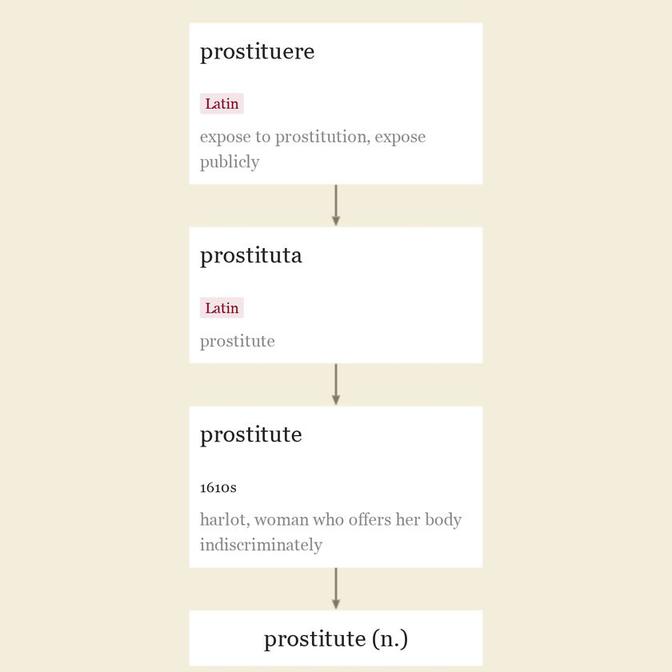 "harlot, woman who offers her body indiscriminately" (usually for money), 1610s, from Latin prostituta "prostitute," fem. of prostitutus "exposed publicly," adjectival use of past participle of prostituere "expose to prostitution; expose publicly" (see prostitute (v.)). No distinction in the use of the word was made between women who did so to gratify themselves, those who did so out of necessity, or those who were forced unwillingly to it.

It was somewhat earlier used in English as an adjective, "offered or exposed to lust" (1570s), earlier still in the figurative sense of "debased, devoted to vile or infamous purposes" (1560s).

The notion of "sex for hire" is not inherent in the etymology, which rather suggests one "exposed to lust" (by herself or another) or sex "indiscriminately offered." Descendants of the Latin word are now almost the official European term for the institution: German prostituierte, Russian prostitutka, etc.

Of men, in reference to homosexual acts, by 1886 (implied in a use of prostitution); the phrase male prostitute is attested by 1948.

"harlot; bold, lascivious woman," early 14c., of uncertain origin. One theory connects it with Latin stuprata, fem. past participle of stuprare "have illicit sexual relations with," or Late Latin strupum "dishonor, violation." But evidence for this is wanting and others suggest Middle Dutch strompe "a stocking," or strompen "to stride, to stalk" (as a prostitute might a customer). The major sources don't seem to give much preference to any of these. Weekley notes "Gregory's Chronicle (c. 1450) has streppett in same sense." In 18c.-early 19c., often abbreviated as strum and also used as a verb, which led to some odd dictionary entries:

TO STRUM: to have carnal knowledge of a woman, also to play badly on the harpsichord or any other stringed instrument. [Capt. Francis Grose, "A Classical Dictionary of the Vulgar Tongue," 1785]

harlot (n.)
c. 1200 (late 12c. in surnames), "vagabond, man of no fixed occupation, idle rogue," from Old French herlot, arlot "vagabond, tramp, vagrant; rascal, scoundrel," with cognates in Old Provençal (arlot), Old Spanish (arlote), and Italian (arlotto), but of unknown origin. Usually male in Middle English and Old French. Used in positive as well as pejorative senses by Chaucer; applied in Middle English to jesters, buffoons, jugglers, later to actors. Secondary sense of "prostitute, unchaste woman" probably had developed by 14c., certainly by early 15c., but this was reinforced by its use euphemistically for "strumpet, whore" in 16c. English translations of the Bible. The word may be Germanic, with an original sense of "camp follower," if the first element is hari "army," as some suspect.
ho (n.)