Old English understandan "comprehend, grasp the idea of," probably literally "stand in the midst of," from under + standan "to stand" (see stand (v.)). If this is the meaning, the under is not the usual word meaning "beneath," but from Old English under, from PIE *nter- "between, among" (source also of Sanskrit antar "among, between," Latin inter "between, among," Greek entera "intestines;" see inter-). Related: Understood; understanding.

That is the suggestion in Barnhart, but other sources regard the "among, between, before, in the presence of" sense of Old English prefix and preposition under as other meanings of the same word. "Among" seems to be the sense in many Old English compounds that resemble understand, such as underniman "to receive," undersecan "examine, investigate, scrutinize" (literally "underseek"), underðencan "consider, change one's mind," underginnan "to begin." It also seems to be the sense still in expressions such as under such circumstances.

Perhaps the ultimate sense is "be close to;" compare Greek epistamai "I know how, I know," literally "I stand upon." Similar formations are found in Old Frisian (understonda), Middle Danish (understande), while other Germanic languages use compounds meaning "stand before" (German verstehen, represented in Old English by forstanden "understand," also "oppose, withstand"). For this concept, most Indo-European languages use figurative extensions of compounds that literally mean "put together," or "separate," or "take, grasp" (see comprehend). Old English oferstandan, Middle English overstonden, literally "over-stand" seem to have been used only in literal senses. For "to stand under" in a physical sense, Old English had undergestandan. 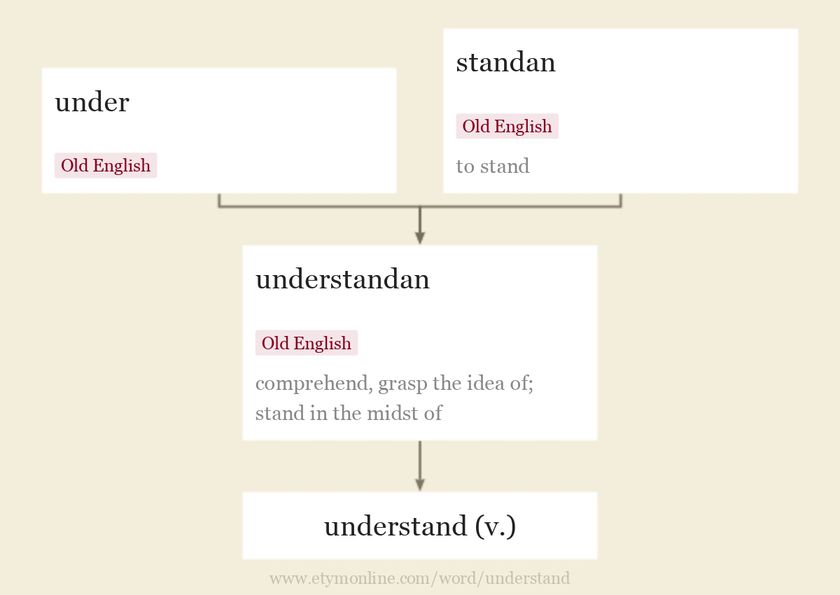 I understand what she means

She did not understand her husband

I don't understand the idea

I understand you have no previous experience?

You don't need to explain--I understand!