1530s, "result, outcome," from Latin successus "an advance, a coming up; a good result, happy outcome," noun use of past participle of succedere "come after, follow after; go near to; come under; take the place of," also "go from under, mount up, ascend," hence "get on well, prosper, be victorious," from sub "next to, after" (see sub-) + cedere "go, move" (from PIE root *ked- "to go, yield"). Meaning "accomplishment of desired end" (good success) first recorded 1580s. Meaning "a thing or person which succeeds," especially in public, is from 1882.

The moral flabbiness born of the bitch-goddess SUCCESS. That — with the squalid interpretation put on the word success — is our national disease. [William James to H.G. Wells, Sept. 11, 1906]

Success story is attested from 1902. Among the French phrases reported by OED as in use in English late 19c. were succès d'estime "cordial reception given to a literary work out of respect rather than admiration" and succès de scandale "success (especially of a work of art) dependent upon its scandalous character." 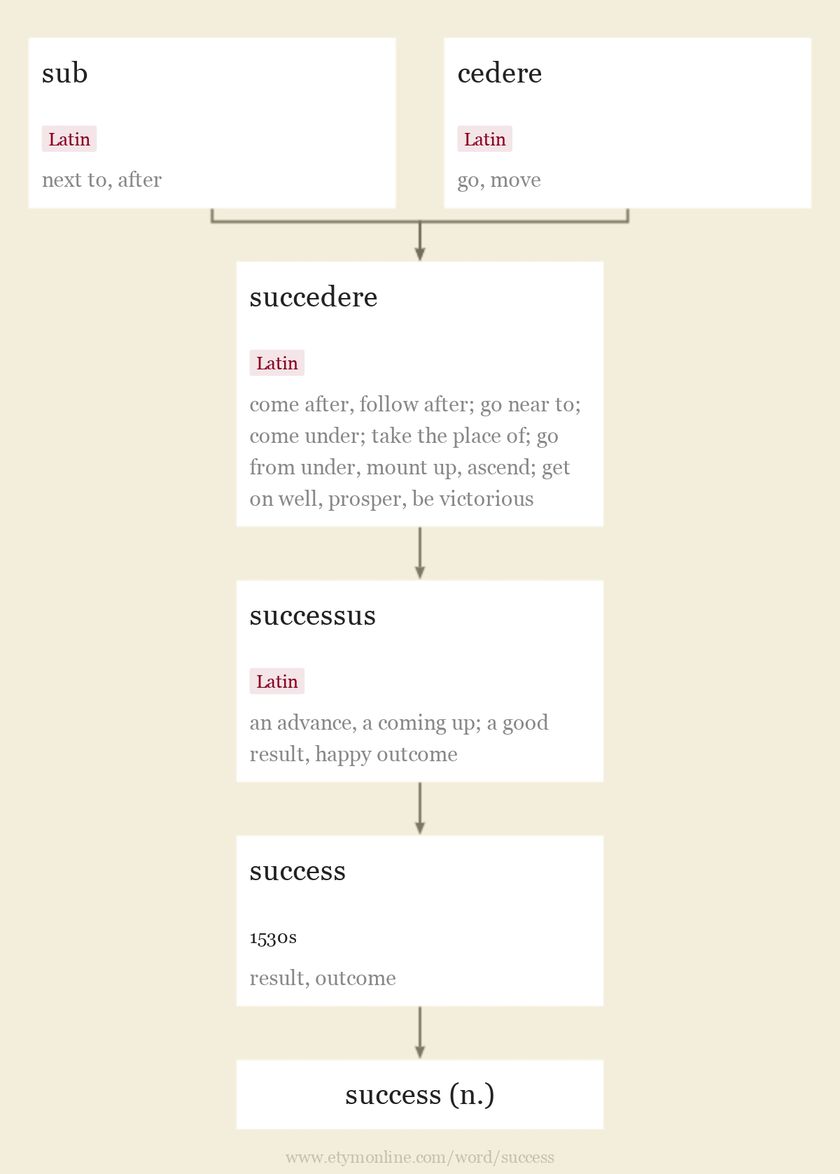 sub-
word-forming element meaning "under, beneath; behind; from under; resulting from further division," from Latin preposition sub "under, below, beneath, at the foot of," also "close to, up to, towards;" of time, "within, during;" figuratively "subject to, in the power of;" also "a little, somewhat" (as in sub-horridus "somewhat rough"), from PIE *(s)up- (perhaps representing *ex-upo-), a variant form of the root *upo "under," also "up from under." The Latin word also was used as a prefix and in various combinations.

In Latin assimilated to following -c-, -f-, -g-, -p-, and often -r- and -m-. In Old French the prefix appears in the full Latin form only "in learned adoptions of old Latin compounds" [OED], and in popular use it was represented by sous-, sou-; as in French souvenir from Latin subvenire, souscrire (Old French souzescrire) from subscribere, etc.

The original meaning is now obscured in many words from Latin (suggest, suspect, subject, etc.). The prefix is active in Modern English, sometimes meaning "subordinate" (as in subcontractor); "inferior" (17c., as in subhuman); "smaller" (18c.); "a part or division of" (c. 1800, as in subcontinent).
*ked-
Proto-Indo-European root meaning "to go, yield."

It is the hypothetical source of/evidence for its existence is provided by: Sanskrit sedhati "to drive, chase away;" Avestan apa-had- "turn aside, step aside;" Latin cedere "to yield, give place; to give up some right or property," originally "to go from, proceed, leave;" Old Church Slavonic chodu "a walking, going," choditi "to go."

let's call heads a success and tails a failure

the election was a remarkable success for the Whigs

success (n.)
an attainment that is successful;

his success in the marathon was unexpected

his new play was a great success

success (n.)
a state of prosperity or fame;

he is enjoying great success

he does not consider wealth synonymous with success

success (n.)
a person with a record of successes;