late 13c., "person who is the chattel or property of another," from Old French esclave (13c.), from Medieval Latin Sclavus "slave" (source also of Italian schiavo, French esclave, Spanish esclavo), originally "Slav" (see Slav); so used in this secondary sense because of the many Slavs sold into slavery by conquering peoples.

The oldest written history of the Slavs can be shortly summarised--myriads of slave hunts and the enthralment of entire peoples. The Slav was the most prized of human goods. With increased strength outside his marshy land of origin, hardened to the utmost against all privation, industrious, content with little, good-humoured, and cheerful, he filled the slave markets of Europe, Asia, and Africa. It must be remembered that for every Slavonic slave who reached his destination, at least ten succumbed to inhuman treatment during transport and to the heat of the climate. Indeed Ibrāhīm (tenth century), himself in all probability a slave dealer, says: "And the Slavs cannot travel to Lombardy on account of the heat which is fatal to them." Hence their high price.

The Arabian geographer of the ninth century tells us how the Magyars in the Pontus steppe dominated all the Slavs dwelling near them. The Magyars made raids upon the Slavs and took their prisoners along the coast to Kerkh where the Byzantines came to meet them and gave Greek brocades and such wares in exchange for the prisoners. ["The Cambridge Medieval History," Vol. II, 1913]

Meaning "one who has lost the power of resistance to some habit or vice" is from 1550s. Applied to devices from 1904, especially those which are controlled by others (compare slave jib in sailing, similarly of locomotives, flash bulbs, amplifiers). Slave-driver is attested from 1807; extended sense of "cruel or exacting task-master" is by 1854. Slave state in U.S. history is from 1812. Slave-trade is attested from 1734.

It is absurd to bring back a runaway slave. If a slave can survive without a master, is it not awful to admit that the master cannot live without the slave? [Diogenes, fragment 6, transl. Guy Davenport]

Old English Wealh "Briton" also began to be used in the sense of "serf, slave" c. 850; and Sanskrit dasa-, which can mean "slave," apparently is connected to dasyu- "pre-Aryan inhabitant of India." Grose's dictionary (1785) has under Negroe "A black-a-moor; figuratively used for a slave," without regard to race. More common Old English words for slave were þeow (related to þeowian "to serve") and þræl (see thrall). The Slavic words for "slave" (Russian rab, Serbo-Croatian rob, Old Church Slavonic rabu) are from Old Slavic *orbu, from the PIE root *orbh- (also source of orphan (n.)), the ground sense of which seems to be "thing that changes allegiance" (in the case of the slave, from himself to his master). The Slavic word is also the source of robot. 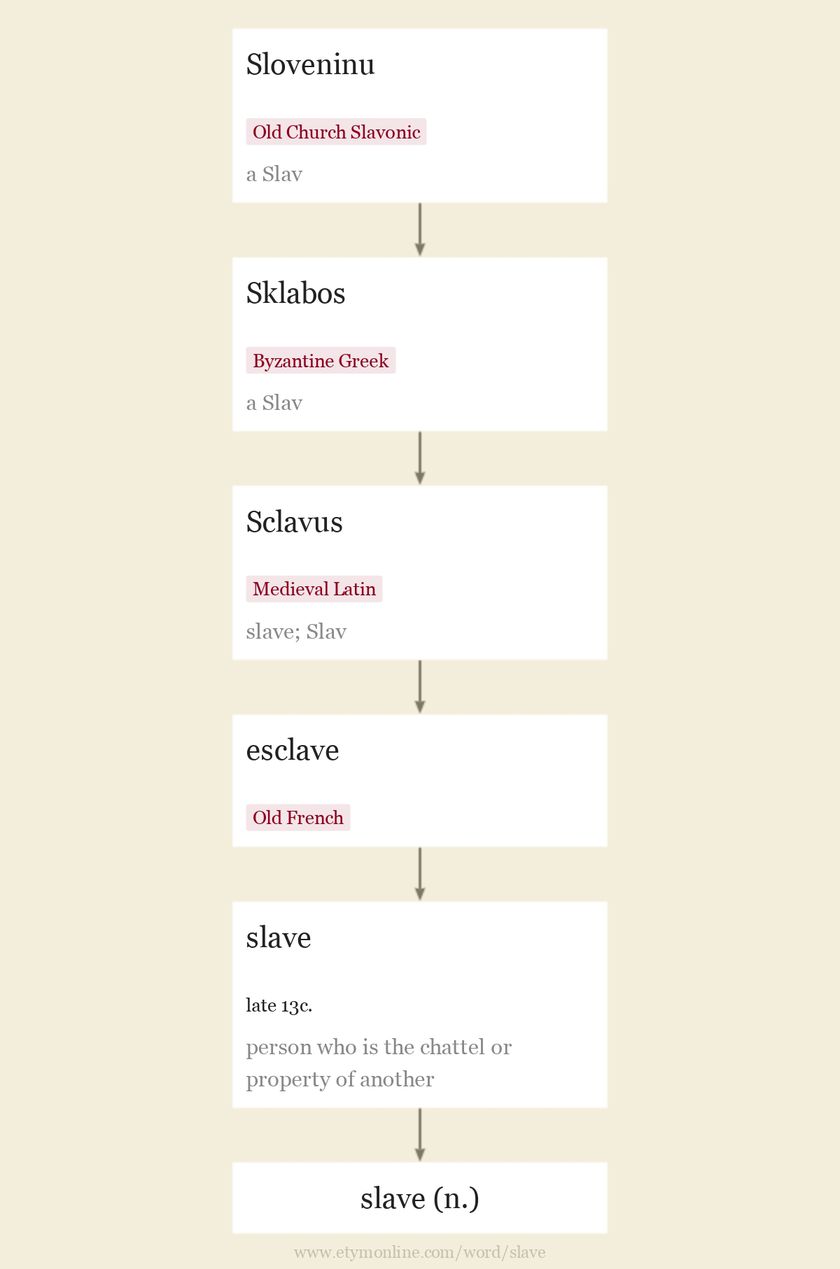 his mother was his abject slave

a slave to cocaine

a slave to fashion

2
slave (v.)
work very hard, like a slave;
Synonyms: break one's back / buckle down / knuckle down
From wordnet.princeton.edu