late 14c., seccioun, in astronomy, "the intersection of two straight lines; a division of a scale;" from Old French section and directly from Latin sectionem (nominative sectio) "a cutting, cutting off, division," noun of action from past-participle stem of secare "to cut" (from PIE root *sek- "to cut").

The meaning "a part cut off or separated from the rest" is from early 15c. That of "a drawing representing something as if cut through" is from 1660s. From 1550s in English in the meaning "act of cutting or dividing," a sense now rare or archaic and preserved in some medical phrases, most notably Caesarian section. The meaning "a subdivision of a written work, statute, etc." is from 1570s.

Books are commonly divided into Chapters, Chapters into Sections, and Sections into Paragraphs or Breaks, as Printers call them .... [Blount, "Glossigraphia," 1656]

In music, "a group of similar instruments in a band or orchestra" (1880). In U.S. history, a square of 640 acres into which public lands were divided (1785). In World War II U.S. military slang, section eight was a reference to the passage in an Army Regulations act that referred to discharge on grounds of insanity. 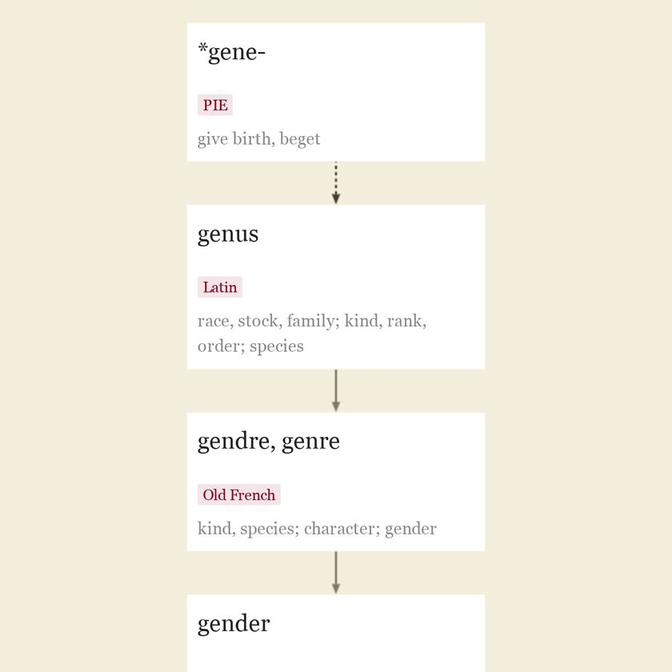 The unetymological  -d- is a phonetic accretion in Old French (compare sound (n.1)). Also used in Latin to translate Aristotle's Greek grammatical term genos. The grammatical sense is attested in English from late 14c. Jespersen ("Philosophy of Grammar," 1924) defines grammatical gender by reference to the Indo-European distinction of masculine, feminine, neuter, "whether the division be based on the natural division into two sexes, or on that between animate and inanimate, or on something else."

"one having characteristics of both sexes," 1917, from German intersexe (1915); see inter- "between" + sex (n.). Coined by German-born U.S. geneticist Richard Benedict Goldschmidt (1878-1958). Intersexual is from 1866 as "existing between the sexes, pertaining to both sexes;" from 1916 as "having both male and female characteristics." Related: intersexuality.

also over-sexed, "inordinately desirous of sex; having sexual properties or tendencies in an excessive degree," 1898; see over- + sex (n.).

1965, from sex (n.) on model of racist, coined by Pauline M. Leet, director of special programs at Franklin & Marshall College, Lancaster, Pennsylvania, U.S., in a speech which circulated in mimeograph among feminists. It was popularized by use in print in Caroline Bird's introduction to "Born Female" (1968), which also introduced sexism.