1610s, "a smatterer, pretender to knowledge," a term of contempt, from Late Latin sciolus "one who knows a little," diminutive of scius "knowing," from scire "to know" (see science) + -ist. Related: Sciolistic; sciolous. 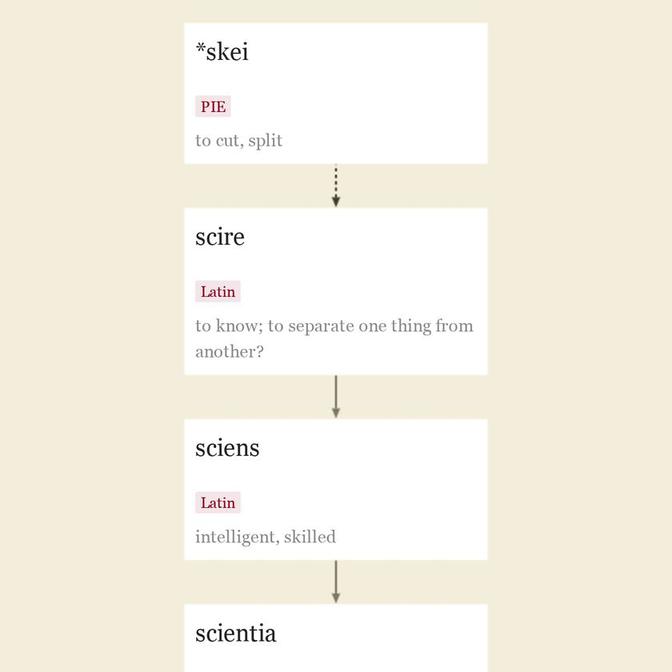 The original notion in the Latin verb probably is "to separate one thing from another, to distinguish," or else "to incise." This is related to scindere "to cut, divide" (from PIE root *skei- "to cut, split;" source also of Greek skhizein "to split, rend, cleave," Gothic skaidan, Old English sceadan "to divide, separate").

OED writes that the oldest English sense of the word now is restricted to theology and philosophy. From late 14c. in English as "book-learning," also "a particular branch of knowledge or of learning, systematized knowledge regarding a particular group of objects;" also "skillfulness, cleverness; craftiness." From c. 1400 as "experiential knowledge;" also "a skill resulting from training, handicraft; a trade."

From late 14c. in the more specific sense of "collective human knowledge," especially that gained by systematic observation, experiment, and reasoning. The modern (restricted) sense of "body of regular or methodical observations or propositions concerning a particular subject or speculation" is attested by 1725; in 17c.-18c. this commonly was philosophy.

The sense of "non-arts studies" is attested from 1670s. The distinction is commonly understood as between theoretical truth (Greek epistemē) and methods for effecting practical results (tekhnē), but science sometimes is used for practical applications and art for applications of skill.

The predominant modern use, "natural and physical science," generally restricted to study of the phenomena of the material universe and its laws, is by mid-19c.

The men who founded modern science had two merits which are not necessarily found together: Immense patience in observation, and great boldness in framing hypotheses. The second of these merits had belonged to the earliest Greek philosophers; the first existed, to a considerable degree, in the later astronomers of antiquity. But no one among the ancients, except perhaps Aristarchus, possessed both merits, and no one in the Middle Ages possessed either. [Bertrand Russell, "A History of Western Philosophy," 1945]

word-forming element meaning "one who does or makes," also used to indicate adherence to a certain doctrine or custom, from French -iste and directly from Latin -ista (source also of Spanish, Portuguese, Italian -ista), from Greek agent-noun ending -istes, which is from -is-, ending of the stem of verbs in -izein, + agential suffix -tes.

Variant -ister (as in chorister, barrister) is from Old French -istre, on false analogy of ministre. Variant -ista is from Spanish, popularized in American English 1970s by names of Latin-American revolutionary movements.