1620s, "act of rebounding or springing back," often of immaterial things, from Latin resiliens, present participle of resilire "to rebound, recoil," from re- "back" (see re-) + salire "to jump, leap" (see salient (adj.)). Compare result (v.). In physical sciences, the meaning "elasticity, power of returning to original shape after compression, etc." is by 1824. 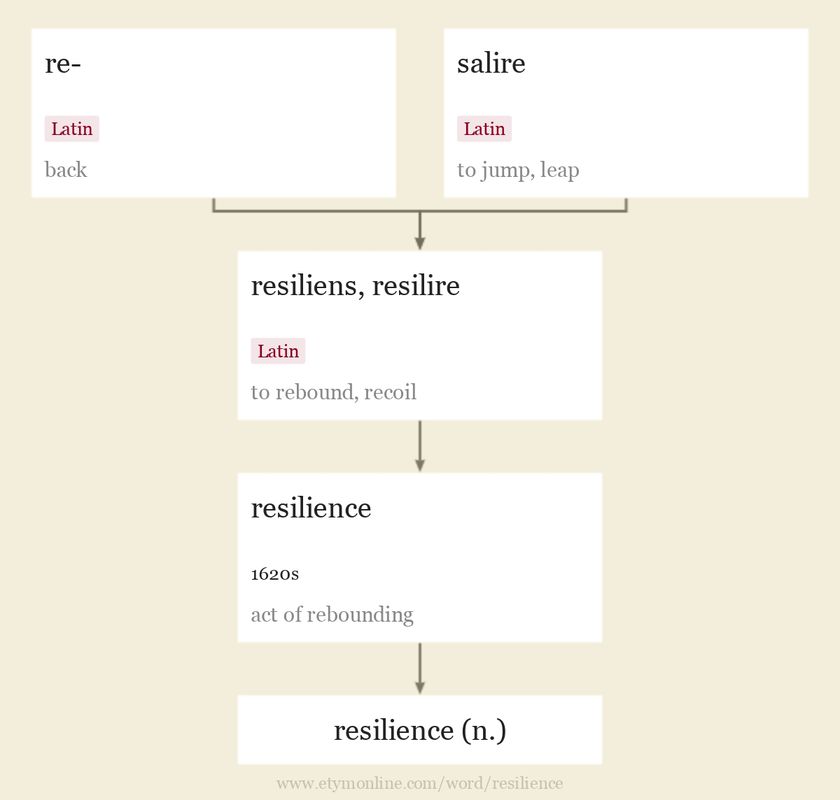 word-forming element meaning "back, back from, back to the original place;" also "again, anew, once more," also conveying the notion of "undoing" or "backward," etc. (see sense evolution below), c. 1200, from Old French re- and directly from Latin re- an inseparable prefix meaning "again; back; anew, against."

Watkins (2000) describes this as a "Latin combining form conceivably from Indo-European *wret-, metathetical variant of *wert- "to turn." De Vaan says the "only acceptable etymology" for it is a 2004 explanation which reconstructs a root in PIE *ure "back."

In earliest Latin the prefix became red- before vowels and h-, a form preserved in redact, redeem, redolent, redundant, redintegrate, and, in disguise, render (v.). In some English words from French and Italian re- appears as ra- and the  following consonant is often doubled (see rally (v.1)).

The many meanings in the notion of "back" give re- its broad sense-range: "a turning back; opposition; restoration to a former state; "transition to an opposite state." From the extended senses in "again," re- becomes "repetition of an action," and in this sense it is extremely common as a formative element in English, applicable to any verb. OED writes that it is "impossible to attempt a complete record of all the forms resulting from its use," and adds that "The number of these is practically infinite ...."

Often merely intensive, and in many of the older borrowings from French and Latin the precise sense of re- is forgotten, lost in secondary senses, or weakened beyond recognition, so that it has no apparent semantic content (receive, recommend, recover, reduce, recreate, refer, religion, remain, request, require). There seem to have been more such words in Middle English than after, e.g. recomfort (v.) "to comfort, console; encourage;" recourse (n.) "a process, way, course." Recover in Middle English also could mean "obtain, win" (happiness, a kingdom, etc.) with no notion of getting something back, also "gain the upper hand, overcome; arrive at;" also consider the legal sense of recovery as "obtain (property) by judgment or legal proceedings."

And, due to sound changes and accent shifts, re- sometimes entirely loses its identity as a prefix (rebel, relic, remnant, restive, rest (n.2) "remainder," rally (v.1) "bring together"). In a few words it is reduced to r-, as in ransom (a doublet of redemption), rampart, etc.

It was used from Middle English in forming words from Germanic as well as Latin elements (rebuild, refill, reset, rewrite), and was used so even in Old French (regret, regard, reward, etc.).

Prefixed to a word beginning with e, re- is separated by a hyphen, as re-establish, re-estate, re-edify, etc. ; or else the second e has a dieresis over it: as, reëstablish, reëmbark, etc. The hyphen is also sometimes used to bring out emphatically the sense of repetition or iteration : as, sung and re-sung. The dieresis is not used over other vowels than e when re is prefixed : thus, reinforce, reunite, reabolish. [Century Dictionary, 1895]

The meaning "pointing outward" (preserved in military usage) is from 1680s; that of "prominent, striking" first recorded 1840, from salient point (1670s), which refers to the heart of an embryo, which seems to leap, and translates Latin punctum saliens, going back to Aristotle's writings. Hence, the "starting point" of anything.