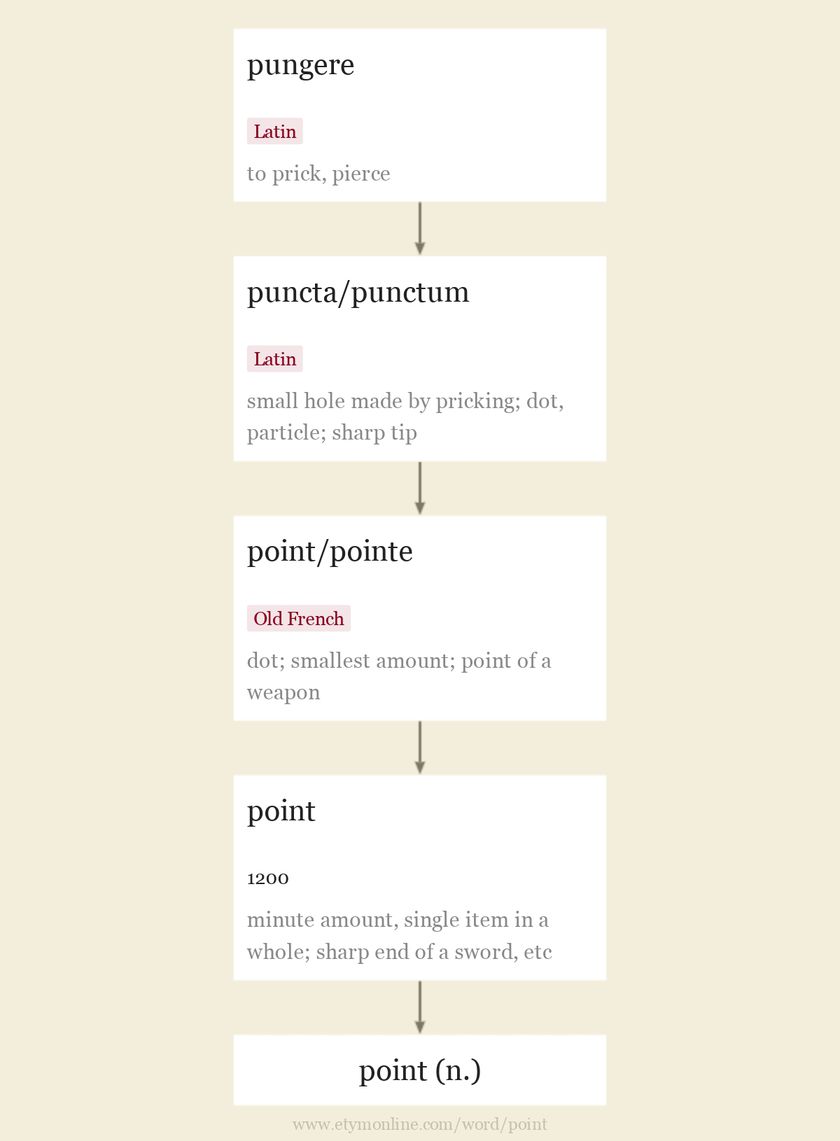 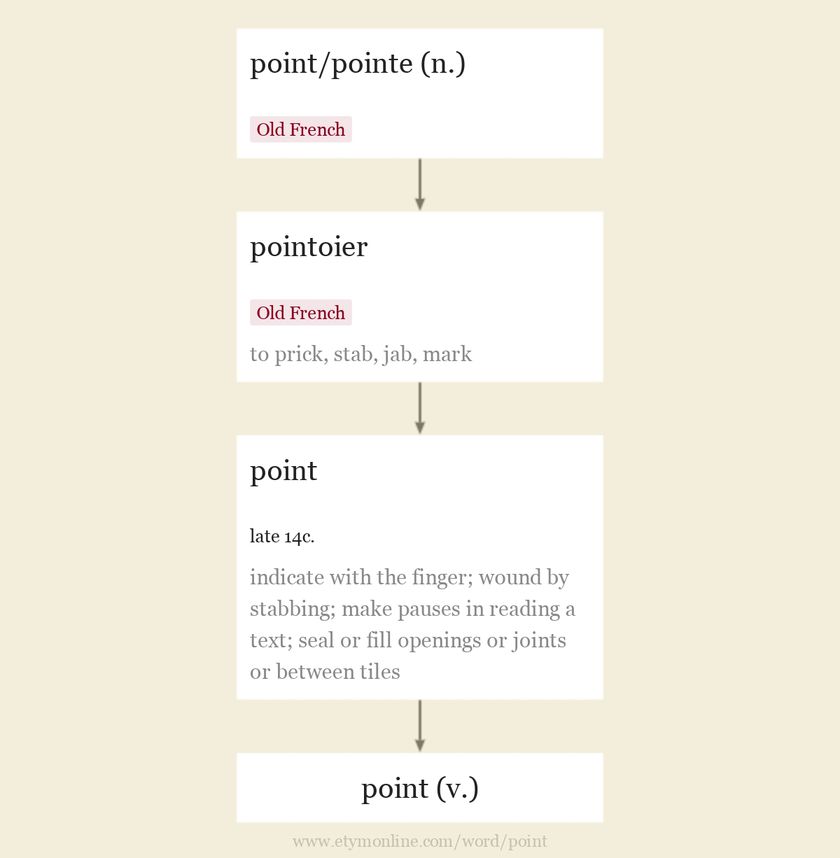 Advertisement
Advertisement
Definitions of point from WordNet
1
point (n.)
a geometric element that has position but no extension;

a point is defined by its coordinates

point (n.)
the precise location of something; a spatially limited location;

point (n.)
a brief version of the essential meaning of something;

life has lost its point

he missed the point of the joke

get to the point

point (n.)
an isolated fact that is considered separately from the whole;

a point of information

Synonyms: detail / item
point (n.)
a specific identifiable position in a continuum or series or especially in a process;
Synonyms: degree / level / stage
point (n.)
an instant of time;

at that point I had to leave

Synonyms: point in time
point (n.)
the object of an activity;

what is the point of discussing it?

the cannibal's teeth were filed to sharp points

a row of points

Synonyms: dot
point (n.)
the unit of counting in scoring a game or contest;

he scored 20 points in the first half

point (n.)
a promontory extending out into a large body of water;

they sailed south around the point

point (n.)
a distinct part that can be specified separately in a group of things that could be enumerated on a list;

the main point on the agenda was taken up first

Synonyms: item
point (n.)
a style in speech or writing that arrests attention and has a penetrating or convincing quality or effect;
point (n.)
an outstanding characteristic;

his acting was one of the high points of the movie

he broke the point of his pencil

he stuck the point of the knife into a tree

point (n.)
any of 32 horizontal directions indicated on the card of a compass;

he checked the point on his compass

Synonyms: compass point
point (n.)
a linear unit used to measure the size of type; approximately 1/72 inch;
point (n.)
one percent of the total principal of a loan; it is paid at the time the loan is made and is independent of the interest on the loan;
point (n.)
a punctuation mark (.) placed at the end of a declarative sentence to indicate a full stop or after abbreviations;
Synonyms: period / full stop / stop / full point
point (n.)
a V-shaped mark at one end of an arrow pointer;

the point of the arrow was due north

Synonyms: head
point (n.)
the dot at the left of a decimal fraction;
Synonyms: decimal point / percentage point
point (n.)
the property of a shape that tapers to a sharp tip;
Synonyms: pointedness
point (n.)
a distinguishing or individuating characteristic;

he knows my bad points as well as my good points

he held me up at the point of a gun

He pointed to the empty parking space

Synonyms: orient
point (v.)
direct into a position for use;

Her behavior points to a severe neurosis

point (v.)
mark (a psalm text) to indicate the points at which the music changes;
point (v.)
be positionable in a specified manner;

The gun points with ease

point (v.)
intend (something) to move towards a certain goal;
Synonyms: target / aim / place / direct
point (v.)
indicate the presence of (game) by standing and pointing with the muzzle;

the dog pointed the dead duck

point (v.)
give a point to;
Synonyms: sharpen / taper
point (v.)
repair the joints of bricks;