also pall-bearer, "one who with others attends the coffin at a funeral," 1707, from pall (n.) in the sense of "cloth spread over a coffin" + agent noun of bear (v.). Originally one who holds the corners of the pall at a funeral.

Middle English pal, from Old English pæll "rich cloth or cloak, purple robe, altar cloth," from Latin pallium "cloak, coverlet, covering," in Tertullian, the garment worn by Christians instead of the Roman toga; related to pallo "robe, cloak," palla "long upper garment of Roman women," perhaps from the root of pellis "skin." The notion of "cloth spread over a coffin" (mid-15c.) led to figurative sense of "dark, gloomy mood" (1742). The earlier figurative sense is "something that covers or conceals" (mid-15c.). 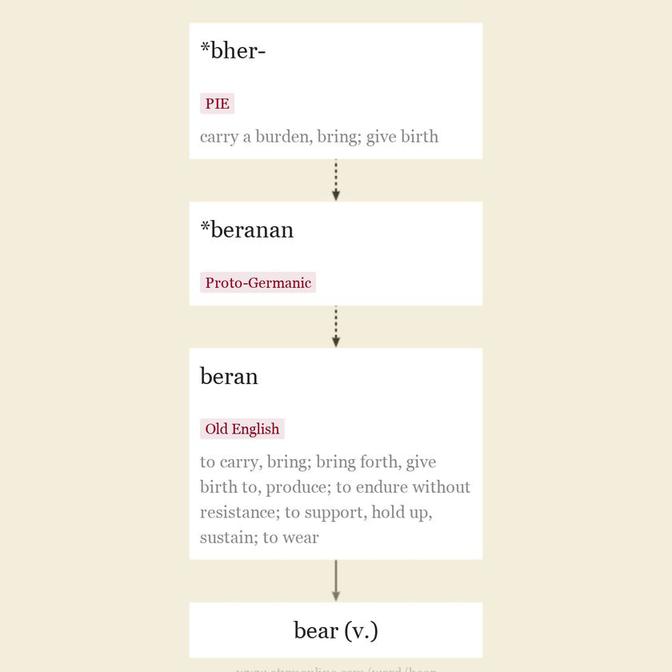 Old English past tense bær became Middle English bare; alternative bore began to appear c. 1400, but bare remained the literary form till after 1600. Past participle distinction of borne for "carried" and born for "given birth" is from late 18c.

Many senses are from notion of "move onward by pressure." From c. 1300 as "possess as an attribute or characteristic." Meaning "sustain without sinking" is from 1520s; to bear (something) in mind is from 1530s; meaning "tend, be directed (in a certain way)" is from c. 1600. To bear down "proceed forcefully toward" (especially in nautical use) is from 1716. To bear up is from 1650s as "be firm, have fortitude."

Advertisement
Advertisement
Definitions of pallbearer from WordNet
pallbearer (n.)
one of the mourners carrying the coffin at a funeral;
Synonyms: bearer
From wordnet.princeton.edu