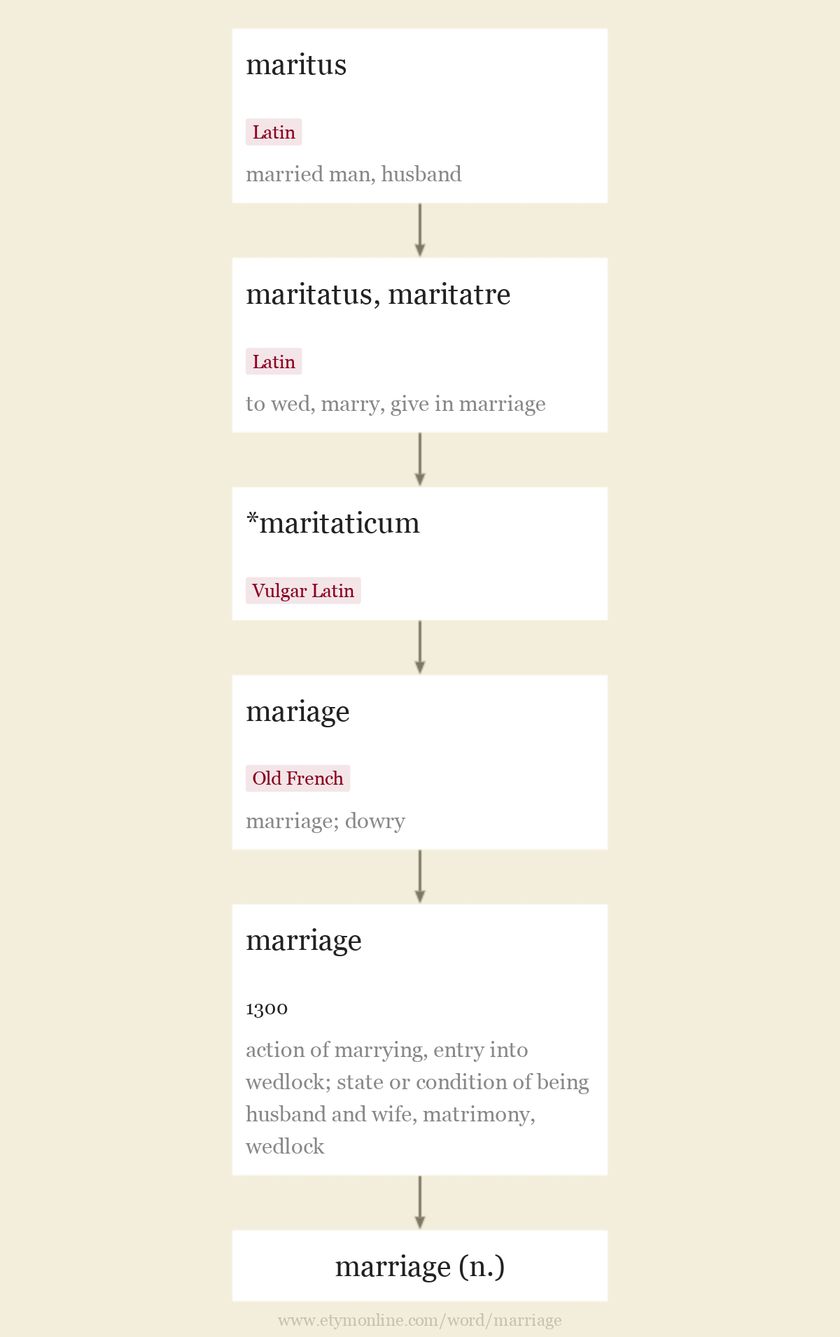 c. 1300, marien, of parents or superiors, "to give (offspring) in marriage," also intransitive, "to enter into the conjugal state, take a husband or wife," from Old French marier "to get married; to marry off, give in marriage; to bring together in marriage," from Latin marītāre "to wed, marry, give in marriage" (source of Italian maritare, Spanish and Portuguese maridar), from marītus (n.) "married man, husband," which is of uncertain origin.

By early 14c. as "to take (someone) in marriage, take for a husband or wife;" by late 14c. as "become husband and wife according to law or custom; get married (to one another)." Transitive sense, of a priest, etc., who performs the rite of marriage, "to unite in wedlock or matrimony," by 1520s.

Figurative meaning "unite intimately or by some close bond of connection" is from early 15c. Related: Married; marrying. Phrase the marrying kind, describing one inclined toward marriage and almost always used with a negative, is attested by 1824, probably short for marrying kind of men, which is from a popular 1756 essay by Chesterfield.

In some Indo-European languages there were distinct "marry" verbs for men and women, though some of these have become generalized. Compare Latin ducere uxorem (of men), literally "to lead a wife;" nubere (of women), perhaps originally "to veil" [Buck]. Also compare Old Norse kvangask (of men) from kvan "wife" (see quean), so, "take a wife;" giptask (of women), from gipta, a specialized use of "to give" (see gift (n.)), so, "to be given."

mariachi (n.)
"Mexican strolling musical band," 1941, from Mexican Spanish, from French mariage "marriage" (see marriage), so called because such bands performed at wedding celebrations. As an adjective by 1967.

a long and happy marriage

Synonyms: matrimony / union / spousal relationship / wedlock
marriage (n.)
two people who are married to each other;

his second marriage was happier than the first

their marriage was conducted in the chapel

a marriage of ideas

the marriage of music and dance