late 14c., "clearly revealed to the eye or the understanding, open to view or comprehension," from Old French manifest "evident, palpable," (12c.), or directly from Latin manifestus "plainly apprehensible, clear, apparent, evident;" of offenses, "proved by direct evidence;" of offenders, "caught in the act," probably from manus "hand" (from PIE root *man- (2) "hand") + -festus, which apparently is identical to the second element of infest.

De Vaan writes, "If manifestus may be interpreted as 'caught by hand', the meanings seem to point to 'grabbing' or 'attacking' for -festus." But he finds none of the proposed ulterior connections compelling, and concludes that, regarding infestus and manifestus, "maybe the two must be separated." If not, the sense development might be from "caught by hand" to "in hand, palpable."

Manifest destiny, "that which clearly appears destined to come to pass; a future state, condition, or event which can be foreseen with certainty, or is regarded as inevitable" was much used in American politics from about the time of the Mexican War "by those who believed that the United States were destined in time to occupy the entire continent" [Century Dictionary].

Other nations have tried to check ... the fulfillment of our manifest destiny to overspread the Continent allotted by Providence for the free development of our yearly multiplying millions. [John O'Sullivan (1813-1895), "U.S. Magazine & Democratic Review," July 1845]

The phrase apparently is O'Sullivan's coinage; the notion is as old as the republic. 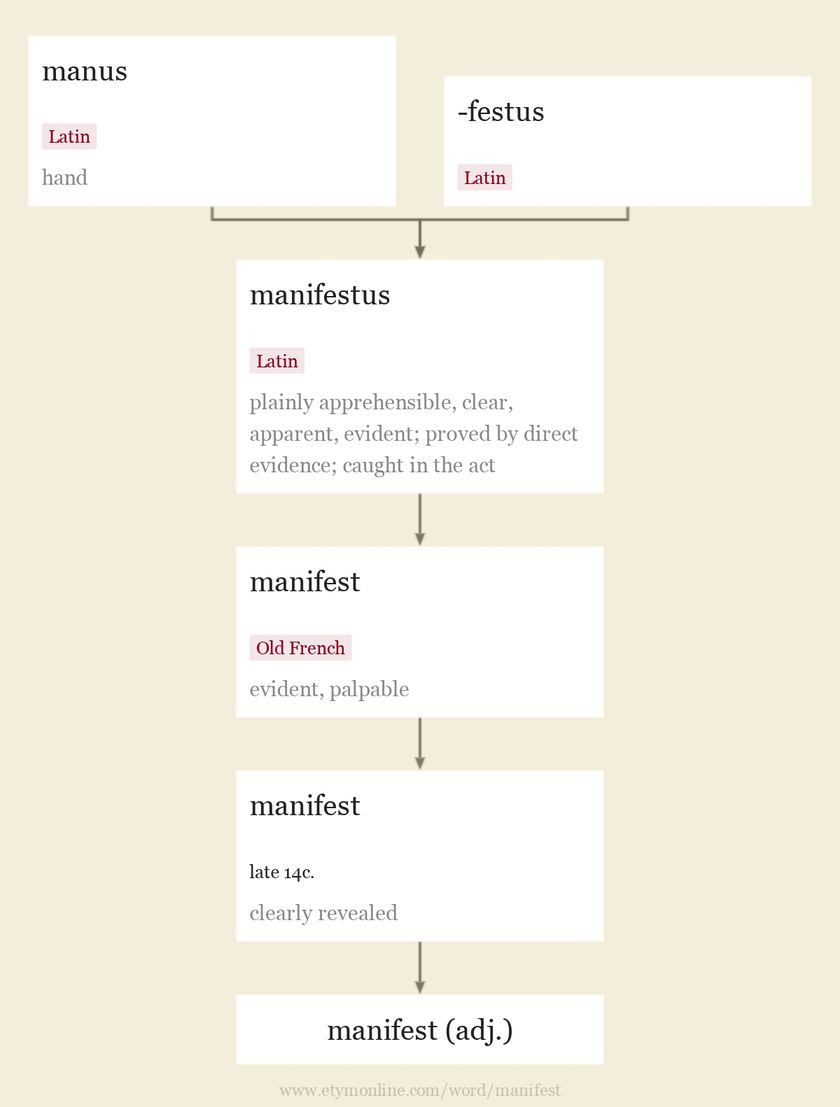 late 14c., "to spread" (one's fame), "to show plainly," from manifest (adj.) or else from Latin manifestare "to discover, disclose, betray." Meaning "to display by actions" is from 1560s; reflexive sense, of diseases, etc., "to reveal as in operation" is from 1808. Related: Manifested; manifesting. 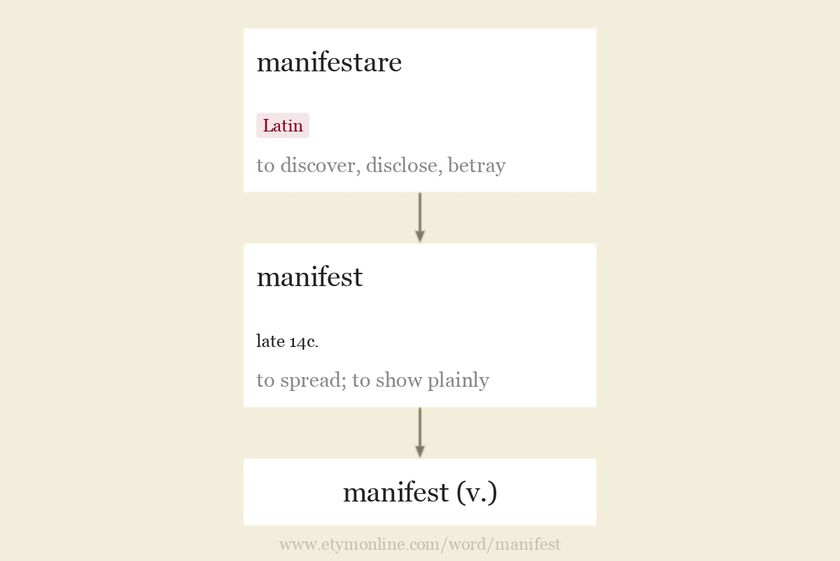 "certified list of a ship's cargo," for use by Customs, 1706; see manifest (adj.). Earlier, "a public declaration" (1610s; compare manifesto), from French manifeste, verbal noun from manifester. Earlier still in English as "a manifestation" (1560s).

The buildings in Rome manifest a high level of architectural sophistication

each passenger must be manifested

manifest (v.)
reveal its presence or make an appearance;

the ghost manifests each year on the same day

2
manifest (n.)
a customs document listing the contents put on a ship or plane;
3
manifest (adj.)
clearly revealed to the mind or the senses or judgment;