Old English cnawan (class VII strong verb; past tense cneow, past participle cnawen), "perceive a thing to be identical with another," also "be able to distinguish" generally (tocnawan); "perceive or understand as a fact or truth" (opposed to believe); "know how (to do something)," from Proto-Germanic *knew- (source also of Old High German bi-chnaan, ir-chnaan "to know"), from PIE root *gno- "to know."

For pronunciation, see kn-. Once widespread in Germanic, the verb is now retained there only in English, where it has widespread application, covering meanings that require two or more verbs in other languages (such as German wissen, kennen, erkennen and in part können; French connaître "perceive, understand, recognize," savoir "have a knowledge of, know how;" Latin scire "to understand, perceive," cognoscere "get to know, recognize;" Old Church Slavonic znaja, vemi). The Anglo-Saxons also used two distinct words for this, the other being witan (see wit (v.)).

From c. 1200 as "to experience, live through." Meaning "to have sexual intercourse with," also found in other modern languages, is attested from c. 1200, from the Old Testament (Genesis iv.1). Attested from 1540s in colloquial phrases suggesting cunning or savvy (but often in the negative); to not know one's ass from one's elbow is from 1930.

You know as a parenthetical filler is from 1712, but it has roots in 14c. You know as a euphemism for a thing or situation unmentionable is from 1867; you-know-who for a person it is thought best not to name (but implying the hearer knows) is from 1840.

As an expression of surprise, what do you know attested by 1914. Don't I know it in the opposite sense ("you need not tell me") is from 1874. You never know as a response to something unexpected is attested from 1924. 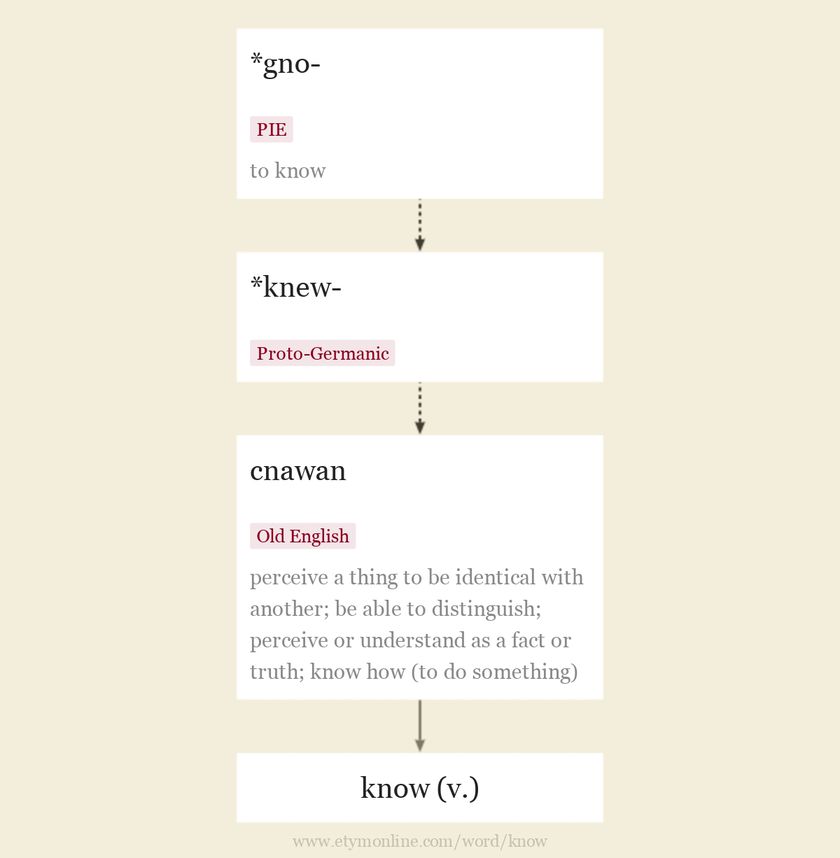 Advertisement
Advertisement
Definitions of know from WordNet
1
know (v.)
be cognizant or aware of a fact or a specific piece of information; possess knowledge or information about;

I know that the President lied to the people

I know it's time

I want to know who is winning the game!

Synonyms: cognize / cognise /
know (v.)
know how to do or perform something;

She knows how to knit

Does your husband know how to cook?

know (v.)
be aware of the truth of something; have a belief or faith in something; regard as true beyond any doubt;

Galileo knew that the earth moves around the sun

I know that I left the key on the table

know (v.)
be familiar or acquainted with a person or an object;

This flower is known as a Peruvian Lily

I know him under a different name

We know this movie

Do you know my sister?

She doesn't know this composer

have you ever known hunger?

I know the feeling!

Synonyms: experience / live
know (v.)
accept (someone) to be what is claimed or accept his power and authority;
Synonyms: acknowledge / recognize / recognise
know (v.)
have fixed in the mind;

Do you know the poem well enough to recite it?

This student knows her irregular verbs

know (v.)
have sexual intercourse with;

we all knew her as a big show-off

know (v.)
be able to distinguish, recognize as being different;

The child knows right from wrong

I know this voice!

2
know (n.)
the fact of being aware of information that is known to few people;

he is always in the know