early 15c., "one and indivisible, inseparable" (with reference to the Trinity), from Medieval Latin individualis, from Latin individuus "indivisible," from in- "not, opposite of" (see in- (1)) + dividuus "divisible," from dividere "divide" (see divide (v.)). Original sense now obsolete; the word was not common before c. 1600 and the 15c. example might be an outlier. Sense of "single, separate, of but one person or thing" is from 1610s; meaning "intended for one person" is from 1889. 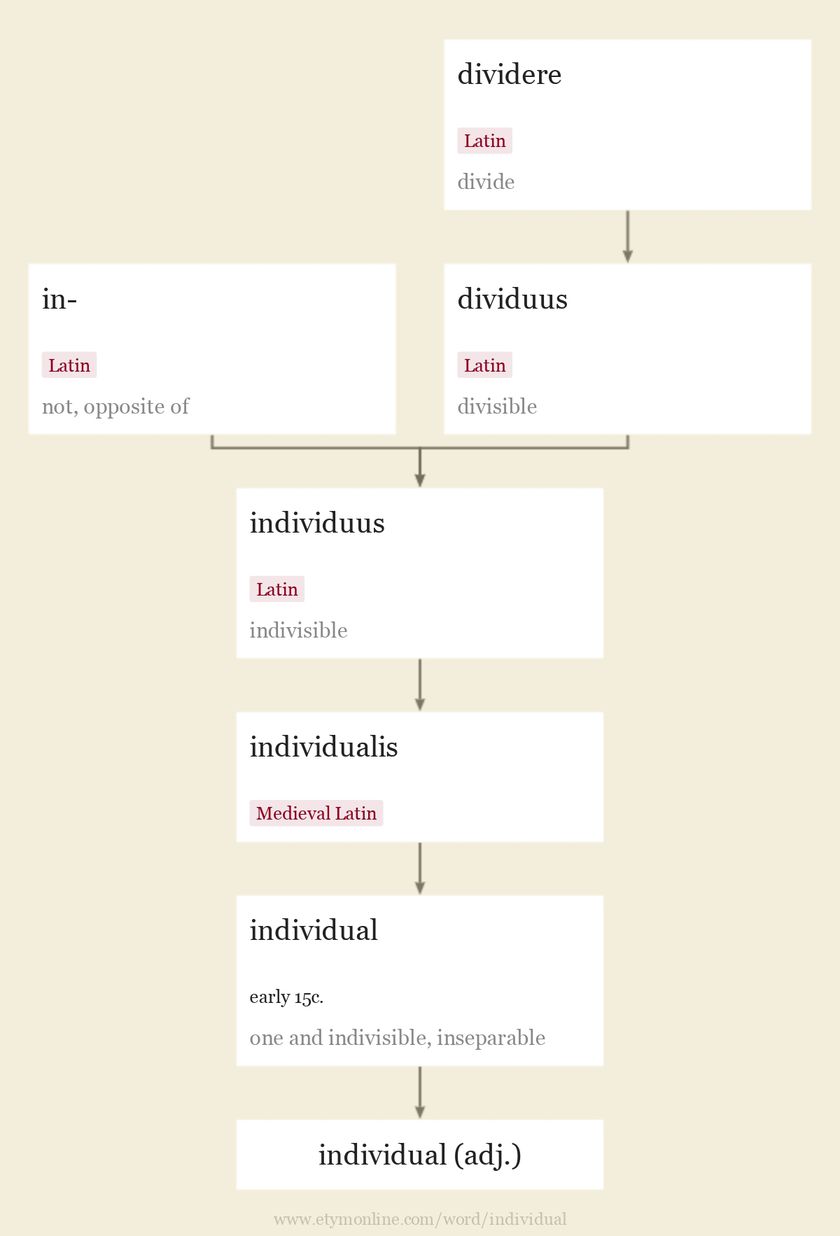 "single object or thing," c. 1600, from individual (adj.). Meaning "a single human being" (as opposed to a group, etc.) is from 1640s. Colloquial sense of "person" is attested from 1742. Latin individuum as a noun meant "an atom, indivisible particle," and in Middle English individuum was used in sense of "individual member of a species" (early 15c.).

early 14c., "separate into parts or pieces," from Latin dividere "to force apart, cleave, distribute," from assimilated form of dis- "apart" (see dis-) + -videre "to separate," which, according to de Vaan, is from PIE *(d)uid- "to separate, distinguish" (source also of Sanskrit avidhat "allotted," Old Avestan vida- "to devote oneself to"). He writes: "The original PIE verb ... (which became thematic in Latin) meant 'to divide in two, separate'. It lost initial *d- through dissimilation in front of the next dental stop, and was reinforced by dis- in Latin ...." Also compare devise.

It is attested from late 14c. as "sever the union or connection with," also "disunite, cause to disagree in opinion." Intransitive sense of "become separated into parts" is from 1520s. Mathematical sense "perform the operation of division" is from early 15c. Divide and rule (c. 1600) translates Latin divide et impera, a maxim of Machiavelli. Related: Divided; dividing.