"one employed in tending a herd of cattle," an alteration of Middle English herdman, from Old English heordman; see herd (n.1) + man (n.). The word was not common until the noun herd (n.2) in sense "keeper of domestic animals which go in herds" fell from use (compare shepherd). The unetymological -s- appeared early 15c., on model of craftsman, etc. 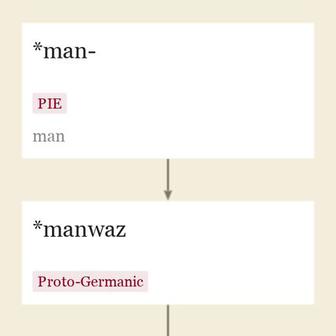 Sometimes connected to root *men- (1) "to think," which would make the ground sense of man "one who has intelligence," but not all linguists accept this. Liberman, for instance, writes, "Most probably man 'human being' is a secularized divine name" from Mannus [Tacitus, "Germania," chap. 2], "believed to be the progenitor of the human race."

Specific sense of "adult male of the human race" (distinguished from a woman or boy) is by late Old English (c. 1000); Old English used wer and wif to distinguish the sexes, but wer began to disappear late 13c. and was replaced by man. Universal sense of the word remains in mankind and manslaughter. Similarly, Latin had homo "human being" and vir "adult male human being," but they merged in Vulgar Latin, with homo extended to both senses. A like evolution took place in Slavic languages, and in some of them the word has narrowed to mean "husband." PIE had two other "man" roots: *uiHro "freeman" (source of Sanskrit vira-, Lithuanian vyras, Latin vir, Old Irish fer, Gothic wair; see *wi-ro-) and *hner "man," a title more of honor than *uiHro (source of Sanskrit nar-, Armenian ayr, Welsh ner, Greek anēr; see *ner- (2)).

Man also was in Old English as an indefinite pronoun, "one, people, they." It was used generically for "the human race, mankind" by c. 1200. As a word of familiar address, originally often implying impatience, c.1400; hence probably its use as an interjection of surprise or emphasis, since Middle English but especially popular from early 20c.

Man-about-town "man of the leisure class who frequents clubs, theaters, and other social resorts" is from 1734. Man of the world is from mid-14c. as "secular man, layman;" by early 15c. as "man experienced in the ways of the world, one able to take things in stride." To do something as one man "unanimously" is from late 14c.