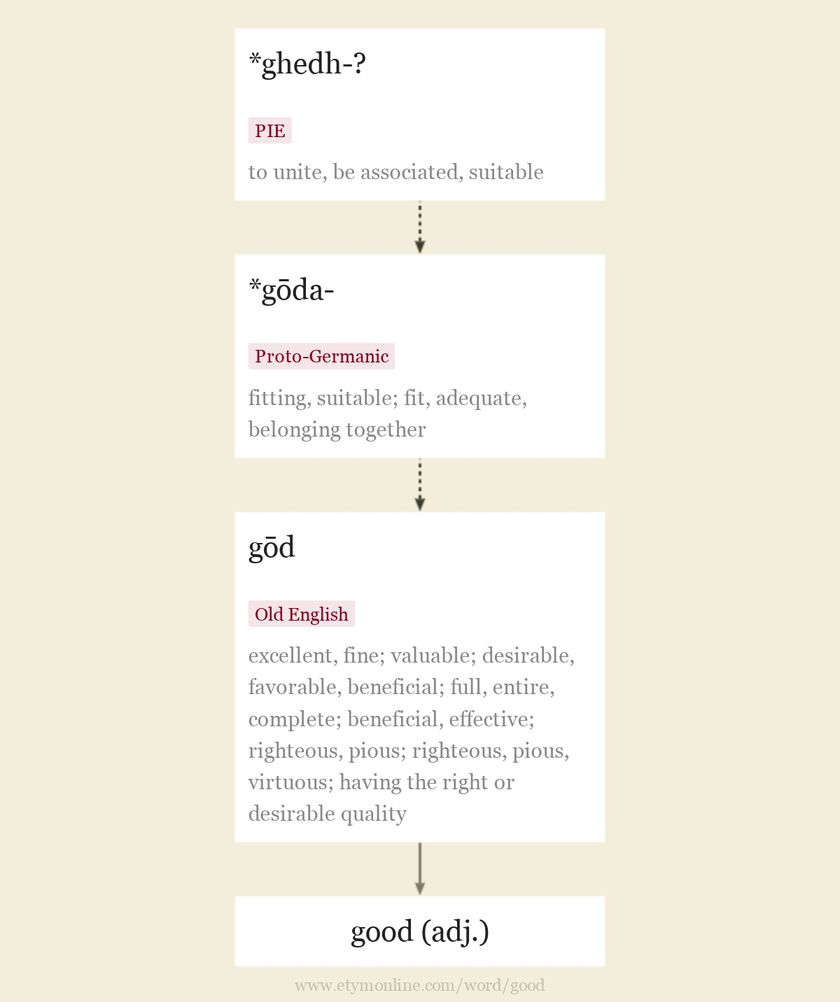 Old English god (with a long "o"), "that which is good, a good thing; goodness; advantage, benefit; gift; virtue; property;" from good (adj.). Meaning "the good side" (of something) is from 1660s. Phrase for good "finally, permanently" attested from 1711, a shortening of for good and all (16c.). Middle English had for good ne ylle (early 15c.) "for good nor ill," thus "under any circumstance."

a warranty good for two years

it's a good thing that I wasn't there

it is good that you stayed

Synonyms: well
good (adj.)
having desirable or positive qualities especially those suitable for a thing specified;

a good dress for the office

good news from the hospital

when she was good she was very very good

a good knife is one good for cutting

this stump will make a good picnic table

a good mile from here

the experience was good for her

we all had a good time

Synonyms: just / upright
good (adj.)
having or showing knowledge and skill and aptitude;

had a good workout

gave the house a good cleaning

good (adj.)
with or in a close or intimate relationship;

a good time to plant tomatoes

good (adj.)
appealing to the mind;

I still have one good leg

the meat is still good

what's the good of worrying?

for your own good

there is much good to be found in people

Synonyms: goodness
good (n.)
that which is pleasing or valuable or useful;

weigh the good against the bad

among the highest goods of all are happiness and self-realization

Synonyms: goodness
good (n.)
articles of commerce;
Synonyms: commodity / trade good
3
good (adv.)
(often used as a combining form) in a good or proper or satisfactory manner or to a high standard (`good' is a nonstandard dialectal variant for `well');

the baby can walk pretty good

we beat him good