To fix is to make fast, or permanent; to set immoveably, &c.: hence, to fix a watch, is to stop it, or prevent it from 'going;' which, it must be admitted, is a very unsatisfactory mode of repairing that article. [Seth T. Hurd, "A Grammatical Corrector; or, Vocabulary of the Common Errors of Speech," 1847]

The spelling was re-Latinized in early Modern English. It has been used figuratively in English since c. 1600 of structural relationships in chemistry, philology, geometry, etc. The meaning "natural liking or attraction, a relationship as close as family between persons not related by blood" is from 1610s.

c. 1400, "boundary, border, frontier, limit" (usually plural), from Old French confins "boundaries," from Medieval Latin confines "a border, boundary," from Latin confinium (plural confinia) "boundary, limit," from confine, neuter of confinis "bordering on, having the same boundaries," from assimilated form of com "with, together" (see con-) + finis "an end" (see finish (v.)). As "the part of a territory which is near the border" (as in Dryden's "Betwixt the confines of the Night and Day") is from c. 1600. 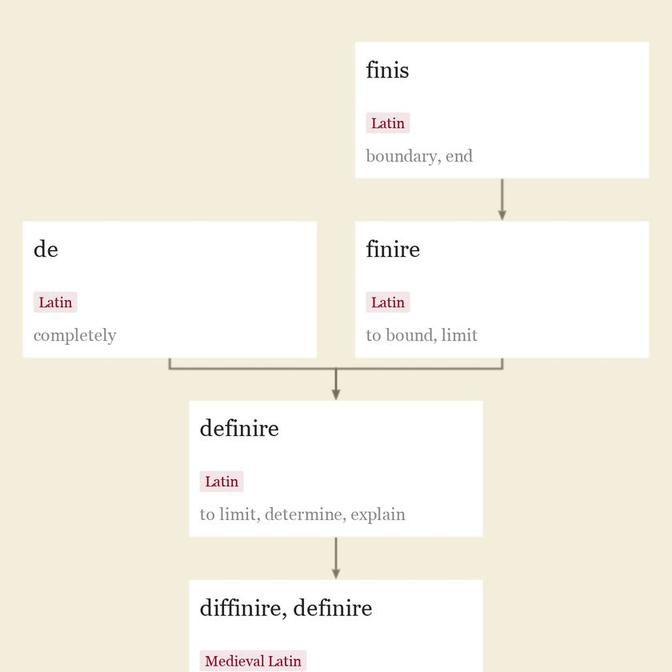 late 14c., deffinen, diffinen, "to specify; to fix or establish authoritatively;" of words, phrases, etc., "state the signification of, explain what is meant by, describe in detail," from Old French defenir, definir "to finish, conclude, come to an end; bring to an end; define, determine with precision," and directly from Medieval Latin diffinire, definire, from Latin definire "to limit, determine, explain," from de "completely" (see de-) + finire "to bound, limit," from finis "boundary, end" (see finish (v.)). From c. 1400 as "determine, declare, or mark the limit of." Related: Defined; defining. 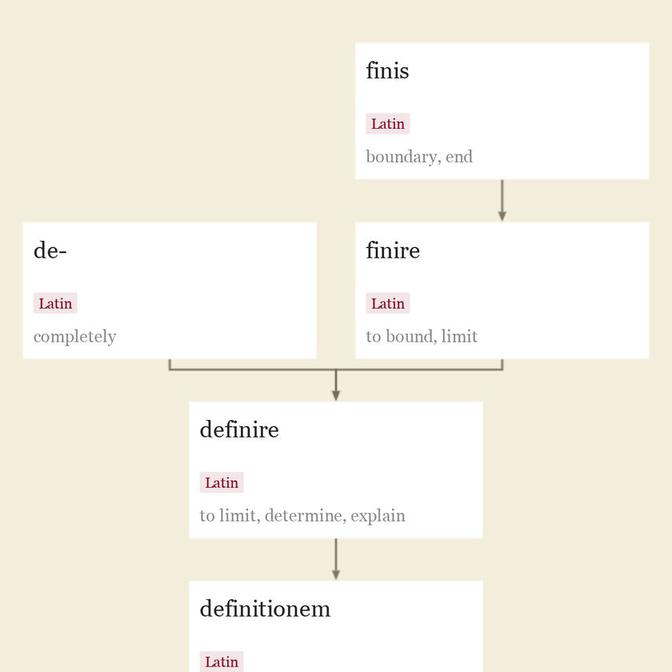 late 14c., diffinicioun, definicion, "decision, setting of boundaries, determination and stating of the limits and distinctive nature of a thing," also "limitations," also "a statement of the meaning of a word or phrase," from Old French definicion, from Latin definitionem (nominative definitio) "a bounding, a boundary; a limiting, prescribing; a definition, explanation," the last sense most often in Cicero, noun of action from past-participle stem of definire "to limit, determine, explain," from de "completely" (see de-) + finire "to bound, limit," from finis "boundary, end" (see finish (v.)). In logic, meaning "act of stating what something means" is from 1640s. Meaning "degree of distinctness of the details in a picture" is from 1889.

final (adj.)
early 14c., from Old French final "final, last," and directly from Late Latin finalis "of or pertaining to an end, concluding, final," from finis "end" (see finish (v.)). As a noun, late 14c., "that which comes last;" meaning "final contest" in a sporting sense is from 1880. As a shortening of final examination, from 1880.
fine (adj.)
mid-13c., "unblemished, refined, pure, free of impurities," also "of high quality, choice," from Old French fin "perfected, of highest quality" (12c.), a back-formation from finire or else from Latin finis "that which divides, a boundary, limit, border, end" (see finish (v.)); hence "acme, peak, height," as in finis boni "the highest good." The English word is from c. 1300 as "rich, valuable, costly;" also in a moral sense "true, genuine; faithful, constant." From late 14c. as "expertly fashioned, well or skillfully made," also, of cloth, "delicately wrought." Of weapons or edges, "sharp" from c. 1400. In reference to quality of gold and silver, late 15c.

In French, the main meaning remains "delicate, intricately skillful;" in English since c. 1300 fine has been also a general broad expression of admiration or approval, the equivalent of French beau (as in fine arts, "those which appeal to the mind and the imagination," 1767, translating French beaux-arts). Related: Finer; finest. Fine print is from 1861 as "type small and close-set;" by 1934 in the extended sense "qualifications and limitations of a deal."
fine (n.)
c. 1200, "termination, end; end of life," from Old French fin "end, limit, boundary; death; fee, payment, finance, money" (10c.), from Latin finis "end" (see finish (v.)), in Medieval Latin also "payment in settlement, fine or tax."

Modern meaning "exaction of money payment for an offense or dereliction" is via sense of "sum of money paid for exemption from punishment or to compensate for injury" (mid-14c., from the same sense in Anglo-French, late 13c.) and from phrases such as to make fine "make one's peace, settle a matter" (c. 1300). Meaning "sum of money imposed as penalty for some offense" is first recorded 1520s.
Next
Advertisement