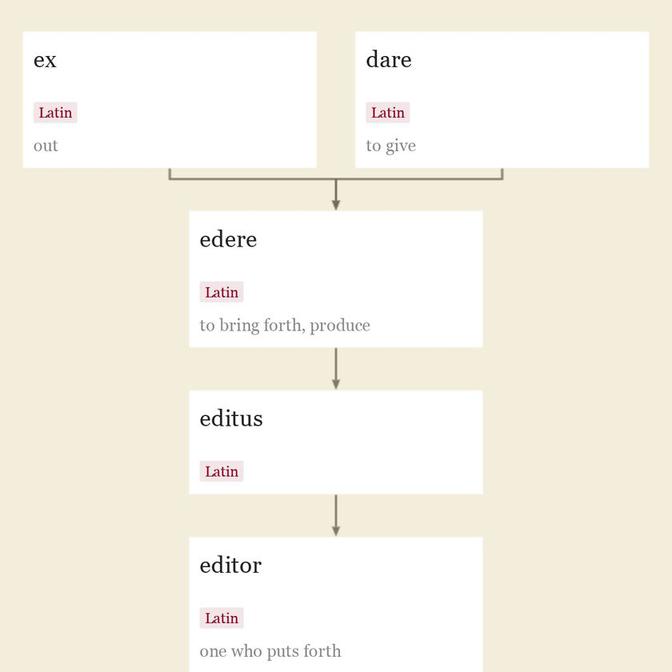 1640s, "publisher," from Latin editor "one who puts forth," agent noun from editus, past participle of edere "to bring forth, produce" (see edition). By 1712 in sense of "person who prepares written matter for publication;" specific sense in newspapers is from 1803.
Advertisement
-al (2)
suffix forming nouns of action from verbs, mostly from Latin and French, meaning "act of ______ing" (such as survival, referral), Middle English -aille, from French feminine singular -aille, from Latin -alia, neuter plural of adjective suffix -alis, also used in English as a noun suffix. Nativized in English and used with Germanic verbs (as in bestowal, betrothal).
editorialize (v.)
"introduce opinions into factual accounts," 1856, from editorial + -ize. Related: Editorialized; editorializing; editorialization.
op-ed (adj.)

by 1931, in reference to the page of a newspaper opposite the editorial page, usually devoted to personal opinion columns and criticism. The thing itself dates to 1921 at the New York "World" and was the brainchild of editor Herbert Bayard Swope, whose op-ed pages launched the celebrity of many of the Algonquin Round Table writers.

"of or pertaining to reporting or reporters," 1852, American English, an irregular formation in imitation of editorial, etc., from Latinized form of reporter + -ial. Related: Reportorially.