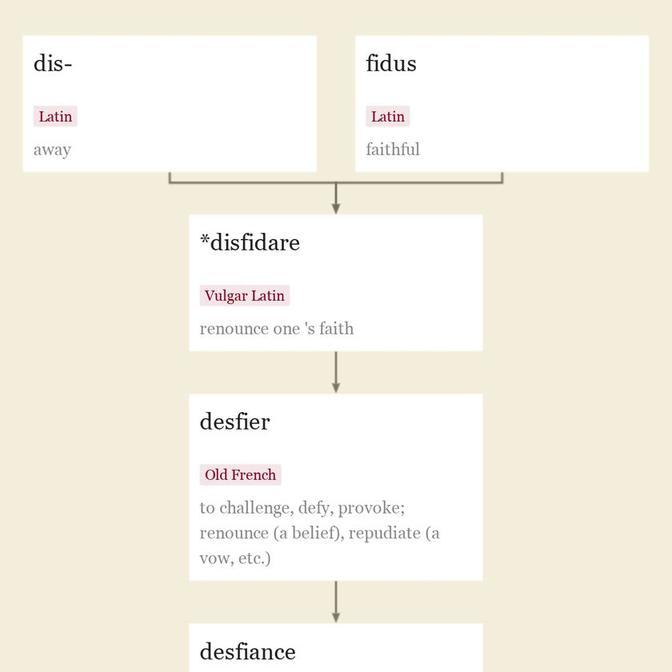 late 14c., "an overflowing of water, a great flood, Noah's Flood in Genesis," from Old French deluge (12c.), earlier deluve, from Latin diluvium "flood, inundation," from diluere "wash away," from dis- "away" (see dis-) + -luere, combining form of lavere "to wash" (from PIE root *leue- "to wash"). Figurative sense of "anything that overflows or floods" is from early 15c.

After me the deluge (F. après moi le déluge), a saying ascribed to Louis XV, who expressed thus his indifference to the results of his policy of selfish and reckless extravagance, and perhaps his apprehension of coming disaster. [Century Dictionary]

late 14c., "that which is censurable, wrong-doing, an offense, a crime," from Old French desmerite "blame, demerit" (Modern French démérite), from des- "not, opposite" (see dis-) + merite "merit" (see merit (n.)) or from Latin demeritum "fault," from past-participle stem of demereri "to merit, deserve," from de- in its completive sense.

Both senses, "that which one deserves," whether good or bad, existed in the French and Middle English words. The positive sense in English faded mid-17c. Meaning "penalty point in school" is by 1862, short for demerit mark.

word-forming element meaning "half, half-sized, partial," used in English from mid-14c., especially in technical terms from French, from Old French demi "half" (12c.), from Late Latin dimedius, from Latin dimidius "half, one-half," which contains the elements dis- "apart" (see dis-) + medius "in the middle, between; from the middle," as a noun "the middle;" from PIE root *medhyo- "middle." Formerly also demy-, and in early use often written as a separate word.

1786 as a military word, "extend (troops) in a line, expand (a unit which had been formed in columns)," from French déployer "unroll, unfold," from Old French desploiier "unfold," from Latin displicare "unfold, scatter," from dis- (see dis-) + plicare "to fold" (from PIE root *plek- "to plait"). "In its AFr. form regularly adopted in ME as desplay" [OED]. Figurative use by 1829. Intransitive sense from 1796. Related: Deployed; deploying.

The French past participle, déraciné, literally "uprooted," was used in English from 1921 in a sense of "uprooted from one's national or social environment."

1776, "throw into confusion, disturb the regular order of," from French déranger, from Old French desrengier "disarrange, throw into disorder," from des- "do the opposite of" (see dis-) + Old French rengier (Modern French ranger) "to put into line," from reng "line, row," from Frankish *hring or some other Germanic source, from Proto-Germanic *hringaz "circle, ring, something curved," from nasalized form of PIE root *sker- (2) "to turn, bend." Mental sense "disorder or unsettle the mind of" is by c. 1790.