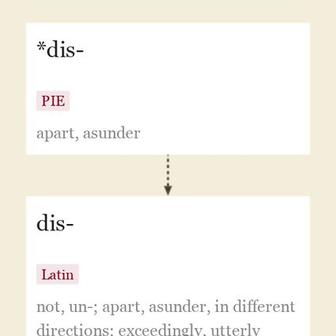 "a dispatch," 1520s, from French dépêche (15c.), from dépêcher "to dispatch," from Old French despeechier, from des- (see des-) + stem of empeechier "to hinder" (see impeach). Not directly related to dispatch. Sometimes nativized as depeach.

The English spelling was partly Latinized in 16c., but it is an exception for its retention of des- in English. It is attested from 1560s in the sense of "the art of composing part-music," also "the upper part or voice." It is attested from 1570s as "a warbled song, a song with various modulations." The transferred sense of "a continued discourse or series of comments on a subject" is recorded from 1590s.

A metaphor taken from musick, where a simple air is made the subject of a composition, and a number of ornamented variations composed upon it. [Hensleigh Wedgwood, "A Dictionary of English Etymology," 1859]