1560s, "a preservative," from noun use of conservatory (adj.) "having the quality of preserving," from Latin conservator "keeper, preserver, defender," agent noun from conservare. Meaning "a place for preserving or carefully keeping anything" is from 1610s, from Latin stem of conservation + -ory. From 1660s as "greenhouse."

Meaning "school of music, for performing arts" is recorded from 1805, from Italian conservatorio or French conservatoire, a place of public instruction and training in some branch of science or the arts, especially music, from Medieval Latin conservatorium. Originally an Italian institution, "hospital for foundlings in which musical education was given;" it was picked up by the French after the Revolution. The Italian word is attested in English from 1771. 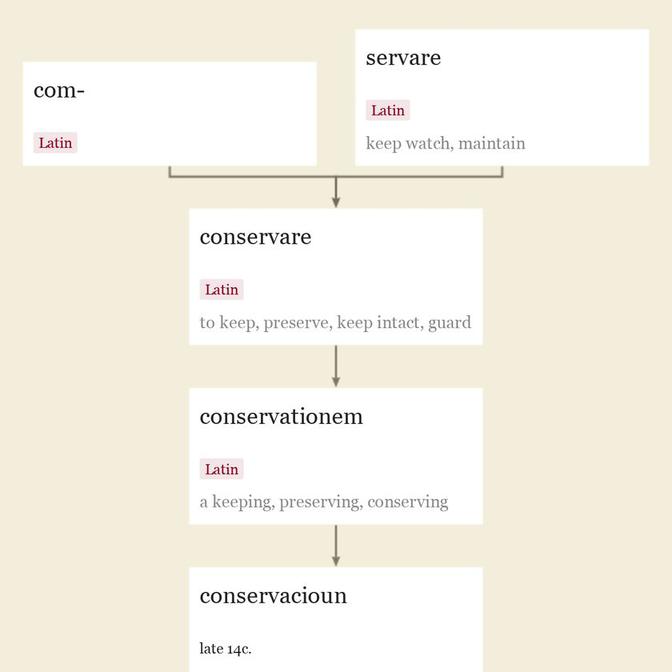 Meaning "preservation of existing conditions" in any sense is from mid-15c. The word has been used since late 15c. in reference to English municipal authorities who had charge of rivers, sewers, forests, fisheries, etc. Specifically with reference to preservation of nature and wild places by 1909.

The phrase conservation of energy apparently was coined in French by Leibnitz in 1692; it is attested in English publications from early 18c. as conservatio virum vivarum or partially nativized versions of it. The exact phrase is attested from 1853.

-ory
adjective and noun suffix, "having to do with, characterized by, tending to, place for," from Middle English -orie, from Old North French -ory, -orie (Old French -oir, -oire), from Latin -orius, -oria, -orium.

Latin adjectives in -orius, according to "An Etymological Dictionary of the French Language," tended to "indicate a quality proper to the action accomplished by the agent; as oratorius from orator; laudatorius from laudator. The neuter of these adjectives was early employed as a substantive, and usually denoted the place of residence of the agent or the instrument that he uses; as praetorium from praetor; dormitorium from dormitor; auditorium, dolatorium.