word-forming element meaning "together, with," sometimes merely intensive; it is the form of com- used in Latin before consonants except -b-, -p-, -l-, -m-, or -r-. In native English formations (such as costar), co- tends to be used where Latin would use con-. 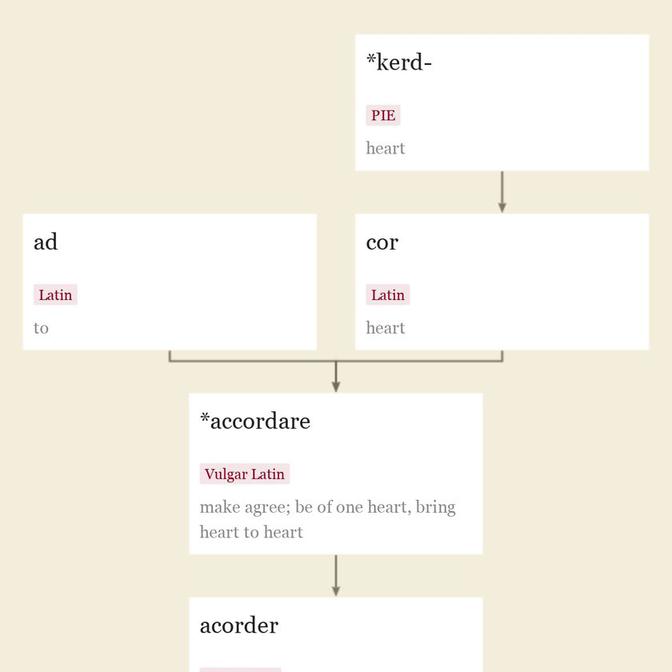 late 14c., "alphabetical arrangement of the important words in a major written work" (especially the Bible, later also of Shakespeare's plays), from Old French concordance (12c.) "agreement, harmony" and directly from Medieval Latin concordantia, from concordantem (nominative concordans), from Latin concordare "be of one mind," from concors "of the same mind" (see concord (n.)).

A verbal concordance consists of an alphabetical list of the principal words used in the work, under each of which references to the passages in which it is found are arranged in order, generally with citation of the essential part of each. A real concordance is an alphabetical index of subjects. [Century Dictionary]

In the precomputing era, search technology was unavailable, and a concordance offered readers of long works such as the Bible something comparable to search results for every word that they would have been likely to search for. Today, the ability to combine the result of queries concerning multiple terms (such as searching for words near other words) has reduced interest in concordance publishing. [Wikipedia]

Originally a citation of parallel passages in the books of the Bible. In Middle English also "state of mutual affection" (late 14c.); "fact of agreeing" (mid-15c.). Related: Concordancy.

"agreeing, agreeable, harmonious," late 15c. of persons, 1510s of things, 1550s of music, from French concordant, from Latin concordantem, present participle of concordare "to agree, be of one mind," from concors "of the same mind" (see concord (n.)). Related: Concordantly.

"agreement between church and state on a mutual matter," 1610s, from French concordat (16c.), from Medieval Latin concordatum, noun use of Latin concordatum, neuter past participle of concordare "to agree," from concors (genitive concordis) "of one mind" (see concord (n.)).

The most celebrated modern concordat is that concluded in 1801 between Napoleon Bonaparte as first consul and Pius VII., defining the restored privileges of the Roman Catholic Church in France, and regulating in detail the relations between the ecclesiastical and civil powers. [Century Dictionary]