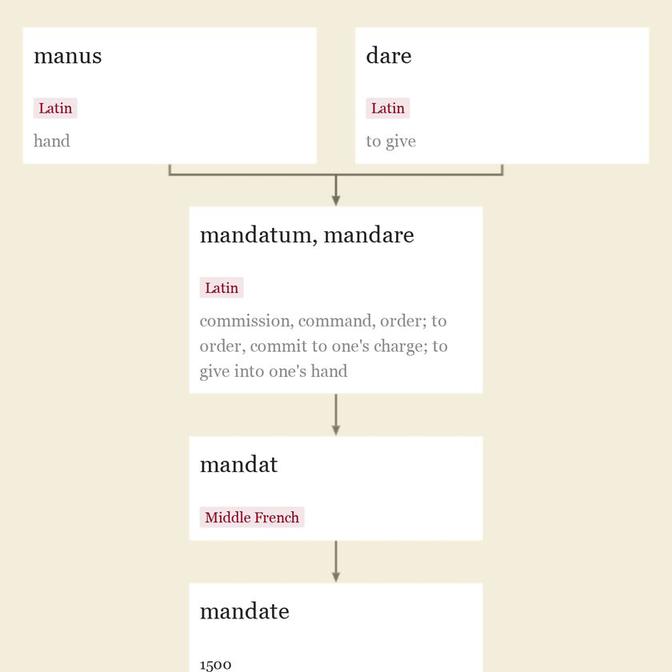 late 15c., "ruling, controlling, directing with authority, of great or controlling importance," present-participle adjective from command (v.). Meaning "nobly dignified, compelling respect, characteristic of one fitted for command" is from 1590s. Meaning "dominant by virtue of size or position" is from 1630s. Related: Commandingly (mid-15c.) "imperiously."

1881, "to seize or force into military service," from Dutch (especially Afrikaans) kommandeeren "to command" (for military service), from French commander "to order" (see command (v.)). General sense "take arbitrary possession of" is from 1900. Related: Commandeered; commandeering.

"one who has the authority or power to command or order," early 14c., comandur, from Old French comandeor "commander, commandant," from comander "to order, enjoin" (see command (v.)). Commander in chief "commander of all the armies of a state" is attested from 1650s. In the U.S., by the Constitution, it is the president; George Washington was so called by 1778.

late 13c., "an order from an authority," originally "any one of the ten injunctions engraved upon stone tablets and given to Moses on Mt. Sinai according to Exodus," from Old French comandement "order, command," from Latin *commandamentum, from *commandare (see command (v.)). Pronounced as four syllables until 17c.

Commandments, short for The Ten Commandments, is attested from early 13c. In Old English they were ða bebodu.

1791, in a South African context, "private military raid undertaken by the Boers against the natives for personal ends," also the name of the leader of the raid and the permission given for it, from Afrikaans commando, "a troop under a commander," from Portuguese commando, literally "party commanded" (see command (v.)).

"A colonist" says he, "who lives two hundred leagues up the country, arrives at the Cape, to complain that the Caffrees have taken all his cattle; and intreats a commando, which is a permission to go, with the help of his neighbours, to retake his property; the governor, who either does not, or feigns not to understand the trick, adheres strictly to the facts expressed in the petition: a preamble of regular information would occasion long delays; a permission is easily given—tis but a word—the fatal word is written, which proves a sentence of death to a thousand poor savages, who have no such defence or resources as their persecutors." [George Carter, "A Narrative of the Loss of the Grosvenor," 1791]

Sense of "elite special forces soldier trained for rapid operations" is from 1940 (originally of shock troops to repel the threatened German invasion of England), first attested in writings of Winston Churchill, who could have picked it up during the Boer War.

Phrase going commando "not wearing underwear" attested by 1996, U.S. slang, perhaps on notion of being ready for instant action.