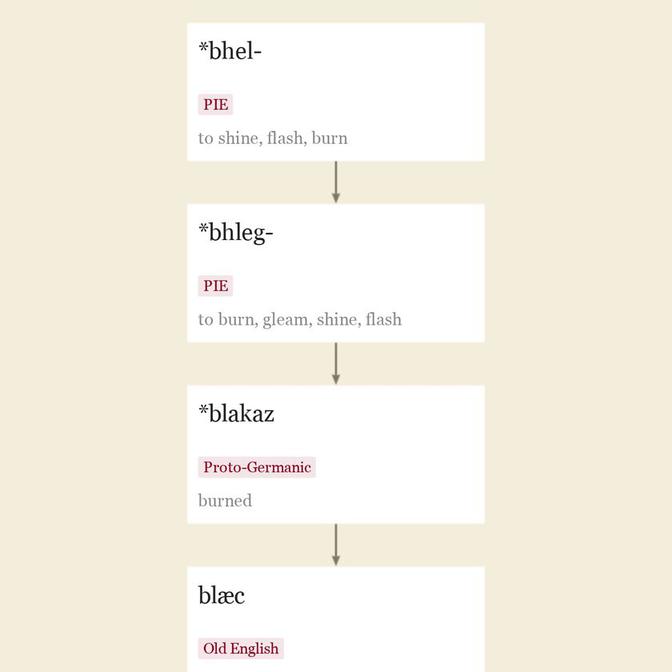 The same root produced Middle English blake "pale," from Old English blac "bright, shining, glittering, pale;" the connecting notions being, perhaps, "fire" (bright) and "burned" (dark), or perhaps "absence of color." According to OED, in Middle English "it is often doubtful whether blac, blak, blake, means 'black, dark,' or 'pale, colourless, wan, livid' "; and the surname Blake can mean either "one of pale complexion" or "one of dark complexion."

Black was used of dark-skinned people in Old English. Of coffee with nothing added, attested by 1796. The meaning "fierce, terrible, wicked" is from late 14c. The figurative senses often come from the notion of "without light," moral or spiritual. Latin niger had many of the same figurative senses ("gloomy; unlucky; bad, wicked, malicious"). The metaphoric use of the Greek word, melas, however, tended to reflect the notion of "shrouded in darkness, overcast." In English it has been the color of sin and sorrow at least since c. 1300; the sense of "with dark purposes, malignant" emerged 1580s (in black art "necromancy;" it is also the sense in black magic).

Black drop (1823) was a liquid preparation of opium, used medicinally. Black-fly (c. 1600) was a name given to various insects, especially an annoying pest of the northern American woods. Black Prince as a nickname of the eldest son of Edward III is attested by 1560s; the exact signification is uncertain. Black flag, flown (especially by pirates) as a signal of no mercy, is from 1590s. Black dog "melancholy" is attested from 1826.

Few Indo-European languages have a word so generic, which can be used of the upper part or surface of just about anything. More typical is German, which has Spitze for sharp peaks (mountains), oberfläche for the upper surface of flat things (such as a table). The meaning "highest position" is from 1620s; the meaning "best part" is from 1660s. The sense of "dominant sexual partner" is by 1961.

To go over the top is World War I slang for "start an attack," in reference to the top of the trenches; as "beyond reasonable limits, too far" it is recorded from 1968. Top of the world as "position of greatest eminence" is from 1670s. Top-of-the-line (adj.) is by 1950.