also bull shit, "eloquent and insincere rhetoric," 1914, American English slang; see bull (n.1) + shit (n.), probably because it smells. But bull in the sense of "trivial or false statements" (1914), which usually is associated with this, might be a continuation of Middle English bull "false talk, fraud" (see bull (n.3)).

Old English word for the animal was hreremus, from hreran "to shake" (see rare (adj.2)), and rattle-mouse, an old dialectal word for "bat," is attested from late 16c. Flitter-mouse (1540s) is occasionally used in English (variants flinder-mouse, flicker-mouse) in imitation of German fledermaus "bat," from Old High German fledaron "to flutter."

As a contemptuous term for an old woman, it is perhaps a suggestion of witchcraft (compare fly-by-night), or from bat as "prostitute who plies her trade by night" [Farmer, who calls it "old slang" and finds French equivalent "night swallow" (hirondelle de nuit) "more poetic"].
shit (n.) 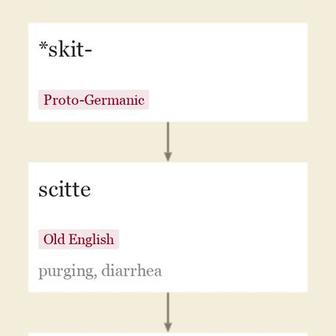