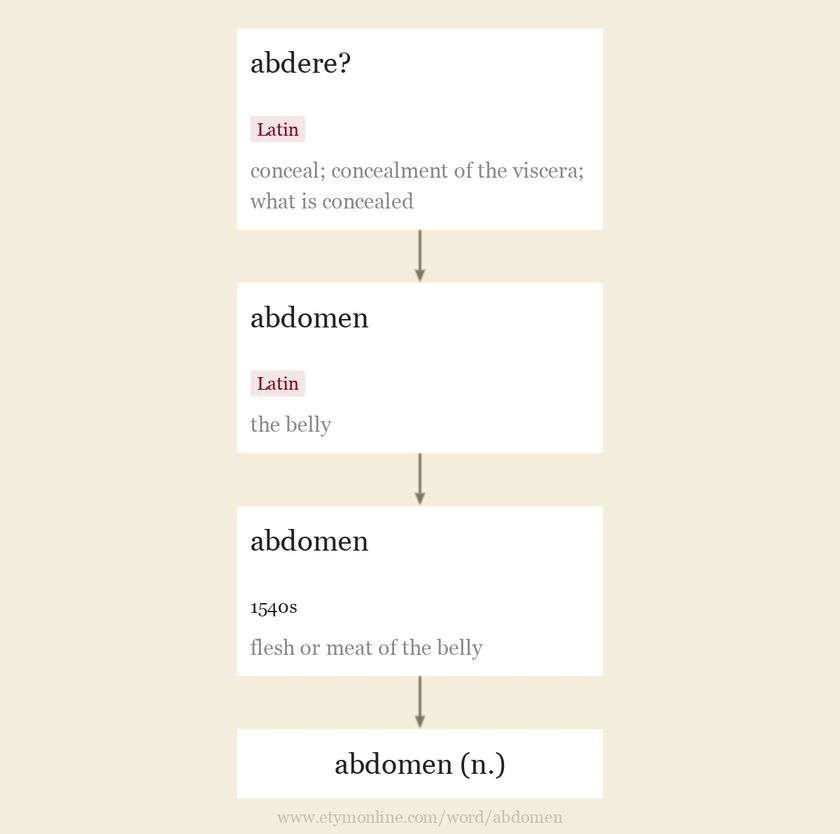 "pertaining to the abdomen, ventral," 1550s, from medical Latin abdominalis, from abdomen (genitive abdominis); see abdomen. As a noun, "abdominal muscle," by 1961 (earlier "abdominal vein," 1928);  earlier as a fish of the order including carp, salmon, and herring (1835), so called for their ventral fins. Related: Abdominally. English in 17c. had abdominous "big-bellied."

By c. 1200 it was being used for "the stomach," especially as a symbol of gluttony, and by late 14c. to mean "abdomen of a human or animal, front part of the body between the breast and the groin or the diaphragm and the pelvis."

The Old English word for "belly, stomach" was buc (cognate with German Bauch, Dutch buik, Old Frisian buk, from West Germanic *būkaz, a word indicative of swelling, with no known connections). The plural of Old English belg emerged in Middle English as a separate word, bellows. Meaning "bulging part or convex surface of anything" is 1590s. The West Germanic root had a figurative or extended sense of "anger, arrogance" (as in Old English bolgenmod "enraged;" belgan (v.) "to become angry"), probably from the notion of "swelling."

Indo-European languages commonly use the same word for both the external belly and the internal (stomach, womb, etc.), but the distinction of external and internal is somewhat present in English belly/stomach; Greek gastr- (see gastric) in classical language denoted the paunch or belly, while modern science uses it only in reference to the stomach as an organ.

As a personal name from 12c. Belly-naked in Middle English was "stripped to the belly, completely naked." Fastidious avoidance of belly in speech and writing (compensated for by stretching the senses of imported stomach and abdomen, baby-talk tummy and misappropriated midriff) began late 18c. and the word was banished from Bibles in many early 19c. editions.