late 14c., "to give up (something) absolutely, relinquish control;" also "surrender (oneself), yield (oneself) utterly," from Old French abandonner, from adverbial phrase à bandon "at will, at discretion," from Latin bannum, "proclamation," which is from a Frankish or other Germanic word.

late 14c., "to give up (something) absolutely, relinquish control, give over utterly;" also reflexively, "surrender (oneself), yield (oneself) utterly" (to religion, fornication, etc.), from Old French abandonner "surrender, release; give freely, permit," also reflexive, "devote (oneself)" (12c.).

The Old French word was formed from the adverbial phrase à bandon "at will, at discretion," from à "at, to" (from Latin ad; see ad-) + bandon "power, jurisdiction," from Latin bannum, "proclamation," which is from a Frankish or other Germanic word, from Proto-Germanic *bannan- "proclaim, summon, outlaw" (things all done by proclamation); see ban (v.).

Mettre sa forest à bandon was a feudal law phrase in the 13th cent. = mettre sa forêt à permission, i.e. to open it freely to any one for pasture or to cut wood in; hence the later sense of giving up one's rights for a time, letting go, leaving, abandoning. [Auguste Brachet, "An Etymological Dictionary of the French Language," transl. G.W. Kitchin, Oxford, 1878]

Meaning "to leave, desert, forsake (someone or something) in need" is from late 15c.  Related: Abandoned; abandoning.

Etymologically, the word carries a sense of "put (something) under someone else's control," and the earliest appearance of the word in English is as an adverb (mid-13c.) with the sense "under (one's) control," hence also "unrestricted."

Again, as that which is placed at the absolute command of one party must by the same act be entirely given up by the original possessor, it was an easy step from the sense of conferring the command of a thing upon some particular person to that of renouncing all claim to authority over the subject matter, without particular reference to the party into whose hands it might come ; and thus in modern times the word has come to be used almost exclusively in the sense renunciation or desertion. [Hensleigh Wedgwood, "A Dictionary of English Etymology," 1859] 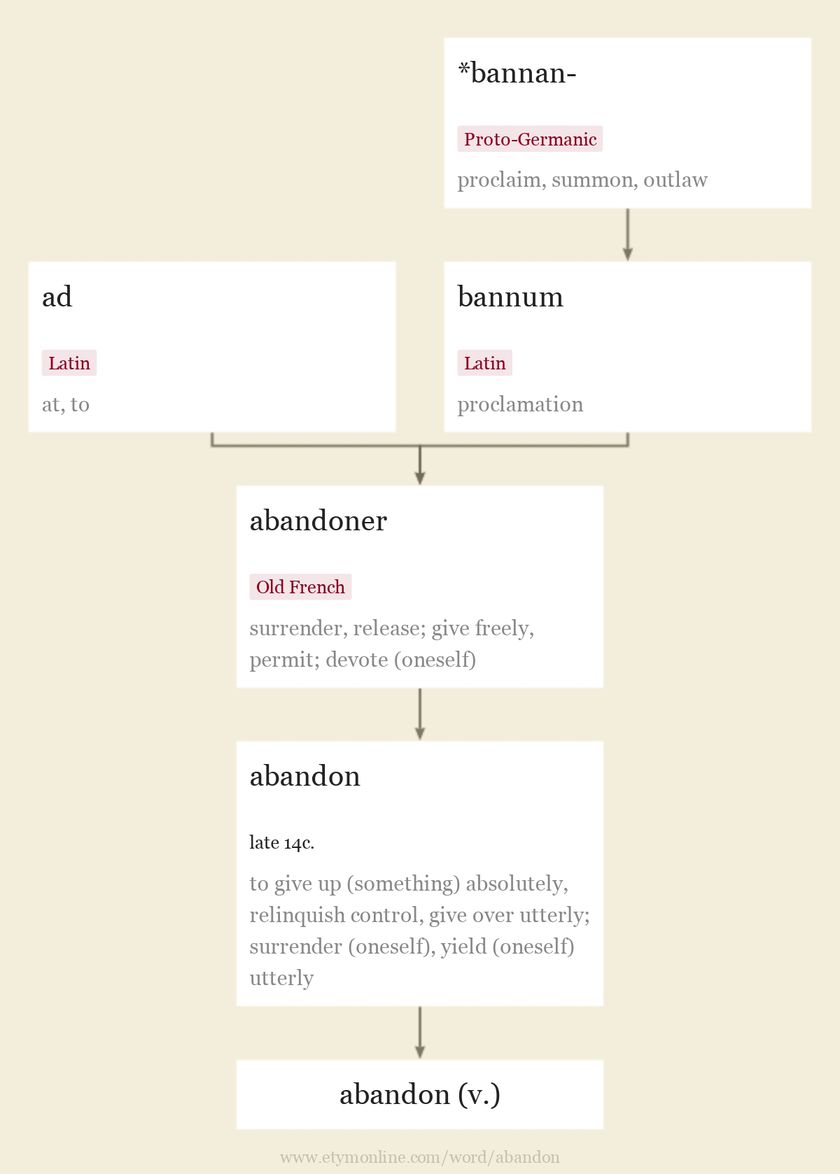 "a letting loose, freedom from self-restraint, surrender to natural impulses," by 1822 as a French word in English (it remained in italics or quotation marks through much of the 19c.; the naturalized abandonment in this sense was attempted from 1834), from a sense in French abandon "abandonment; permission" (12c.), from abandonner "to surrender, release" (see abandon (v.)).

We abandoned the old car in the empty parking lot

abandon (v.)
give up with the intent of never claiming again;
Synonyms: give up
abandon (v.)
leave behind empty; move out of;
Synonyms: vacate / empty
abandon (v.)
stop maintaining or insisting on; of ideas or claims;

He abandoned the thought of asking for her hand in marriage

Synonyms: give up
abandon (v.)
leave someone who needs or counts on you; leave in the lurch;
Synonyms: forsake / desolate / desert
2
abandon (n.)
the trait of lacking restraint or control; reckless freedom from inhibition or worry;

she danced with abandon