Words related to a-

The stone had a reputation among the ancients for preventing drunkenness; this was perhaps sympathetic magic suggested by its wine-like color. Beekes writes that the stone "was named after its color: the red of wine diluted with water such that it is no longer intoxicating." When drinking, people wore rings made of it to ward off the effects. The spelling was restored in early Modern English.

"ethically indifferent," 1882, a hybrid formed from Greek-derived a- "not" (see a- (3)) + moral, which is from Latin. Apparently coined by Robert Louis Stevenson as a differentiation from immoral.

1870, "one who professes that the existence of a First Cause and the essential nature of things are not and cannot be known" [Klein]; coined by T.H. Huxley, supposedly in September 1869, from Greek agnostos "unknown, unknowable," from a- "not" (see a- (3)) + gnōstos "(to be) known" (from PIE root *gno- "to know"). The coinage is sometimes said to be a reference to Paul's mention of the altar to "the Unknown God" in Acts, but according to Huxley it was a reference to the early Church movement known as Gnosticism (see Gnostic). The adjective also is from 1870.

I ... invented what I conceived to be the appropriate title of 'agnostic,' ... antithetic to the 'Gnostic' of Church history who professed to know so much about the very things of which I was ignorant. [T.H. Huxley, "Science and Christian Tradition," 1889]

The agnostic does not simply say, "I do not know." He goes another step, and he says, with great emphasis, that you do not know. [Robert G. Ingersoll, "Reply to Dr. Lyman Abbott," 1890] 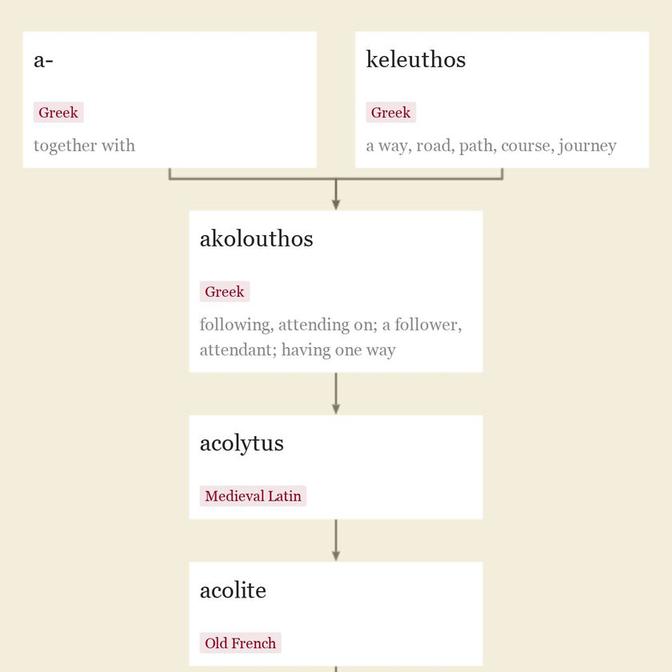 early 14c., "inferior officer in the church," from Old French acolite or directly from Medieval Latin acolytus (Late Latin acoluthus), from Greek akolouthos "following, attending on," as a noun, "a follower, attendant," literally "having one way," from a- "together with," copulative prefix (see a- (3)), + keleuthos "a way, road, path, course, journey," which is of unknown etymology. The word was in late Old English as acolitus, a Latin form; in early modern English a corrected form acolythe was used.

c. 1600, "pertaining to hearing or sound," from French acoustique, from Latinized form of Greek akoustikos "pertaining to hearing," from akoustos "heard, audible," verbal adjective from akouein "to hear," which probably is from copulative prefix a- (see a- (3)) + koein "to mark, perceive, hear" (from PIE root *kous- "to hear," which is also the presumed source of English hear).

In reference to material meant to deaden sound, 1924. Of sound reproduced mechanically (rather than electrically) from 1932 in reference to gramophone players; acoustic guitar (as distinguished from electric) is attested by 1958. Related: Acoustical; acoustically.

district of London, so called because it was laid out c. 1768 and built by four brothers of a family named Adam; from Greek adelphos "brother," literally "from the same womb, co-uterine," from copulative prefix a- "together with" (see a- (3)) + delphys "womb," which is perhaps related to dolphin (q.v.). The district was the site of the popular Adelphi theater c. 1882-1900, which for a time gave its name to a style of performance.

Proto-Indo-European root meaning "one; as one, together with."

It is the hypothetical source of/evidence for its existence is provided by: Sanskrit sam "together," samah "even, level, similar, identical;" Avestan hama "similar, the same;" Greek hama "together with, at the same time," homos "one and the same," homios "like, resembling," homalos "even;" Latin similis "like;" Old Irish samail "likeness;" Old Church Slavonic samu "himself."

abiogenesis (n.)
"spontaneous generation" (of life, without parent organisms), 1870, coined in Modern Latin by T.H. Huxley, from a- (3) + biogenesis.