Africa (n.)
Latin Africa (terra) "African land, Libya, the Carthaginian territory, the province of Africa; Africa as a continent," fem. of adjective Africus, from Afer "an African," a word of uncertain origin. The Latin word originally was used only in reference to the region around modern Tunisia; it gradually was extended to the whole continent. Derivation from a Phoenician cognate of Arabic afar "dust, earth" is tempting. The Middle English word was Affrike.
Advertisement
Negro (n.) 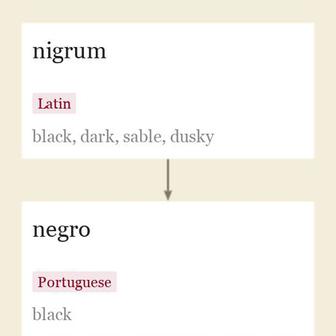 1550s, "member of a black-skinned race of Africa," from Spanish or Portuguese negro "black," from Latin nigrum (nominative niger) "black, dark, sable, dusky" (applied to the night sky, a storm, the complexion), figuratively "gloomy, unlucky, bad, wicked," according to de Vaan a word of unknown etymology; according to Watkins, perhaps from PIE *nekw-t- "night." The Latin word also was applied to the black peoples of Africa, but the usual terms were Aethiops and Afer.

As an adjective from 1590s. Use with a capital N- became general early 20c. (e.g. 1930 in "New York Times" stylebook) in reference to U.S. citizens of African descent, but because of its perceived association with white-imposed attitudes and roles the word was ousted late 1960s in this sense by Black (q.v.).

Professor Booker T. Washington, being politely interrogated ... as to whether negroes ought to be called 'negroes' or 'members of the colored race' has replied that it has long been his own practice to write and speak of members of his race as negroes, and when using the term 'negro' as a race designation to employ the capital 'N' [Harper's Weekly, June 2, 1906]

Meaning "African-American vernacular, the English language as spoken by U.S. blacks" is from 1704. French nègre is a 16c. borrowing from Spanish negro. Older English words were Moor and blackamoor. A Middle English word for "Ethiopian" (perhaps also "a negro" generally) was blewman "blue man."

African-American (adj.)
there are isolated instances from the late 18th and early 19th centuries, but the modern use is a re-invention first attested 1969 (in reference to the African-American Teachers Association) which became the preferred term in some circles for "U.S. black" (noun or adjective) by the late 1980s. See African + American. Mencken, 1921, reports Aframerican "is now very commonly used in the Negro press." Afro-American is attested in 1853, in freemen's publications in Canada. Africo-American (1817 as a noun, 1826 as an adjective) was common in abolitionist and colonization society writings.
Africanism (n.)
1640s in reference to qualities of Latin peculiar to writers from Roman Africa (especially Church fathers), from African + -ism. By 1836 as "mode of speech peculiar to African-Americans." From 1957 in reference to the political development of African nations or peoples.
Eurafrican (adj.)
1884 of the region of the Atlantic beside both continents; ; see Euro- + African Transferred or re-coined to describe the "colored" population of South Africa (1920s) and political situations involving both continents (1909).
pan-Africanism
1955, from pan-African (1900), from pan- + African.
Advertisement