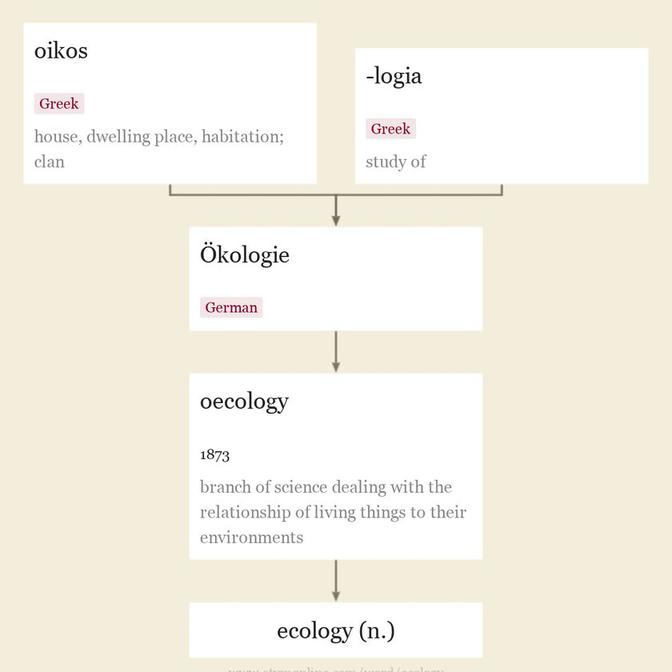 1873, oecology, "branch of science dealing with the relationship of living things to their environments," coined in German by German zoologist Ernst Haeckel as Ökologie, from Greek oikos "house, dwelling place, habitation" (from PIE root *weik- (1) "clan") + -logia "study of" (see -logy). In use with reference to anti-pollution activities from 1960s. 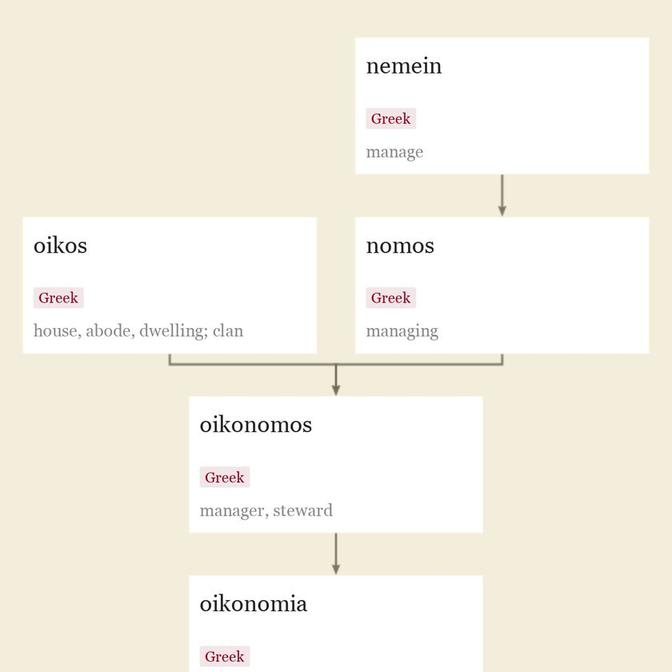 late 16c., "representing the entire (Christian) world," formed in English as an ecclesiastical word, from Late Latin oecumenicus "general, universal," from Greek oikoumenikos "from the whole world," from he oikoumene ge "the inhabited world (as known to the ancient Greeks); the Greeks and their neighbors considered as developed human society (as opposed to barbarian lands)," in later use "the Roman world" and in the Christian sense in ecclesiastical Greek, from oikoumenos, present passive participle of oikein "inhabit," from oikos "house, habitation" (from PIE root *weik- (1) "clan"). Related: Ecumenic.

"resident alien in an ancient Greek state," 1808, from Late Latin metycus, from Greek metoikos, literally "one who has changed his residence," from meta "change" (see meta-) + oikos "dwelling," from oikein "to dwell" (from PIE root *weik- (1) "clan"). Generally they bore the burdens of a citizen and had some of a citizen's privileges.

Nasty, in England frequently meaning ill-tempered or cross-grained (Slang Dictionary, p. 186), and in this sense admitted into good society, denotes in America something disgusting in point of smell, taste, or even moral character, and is not considered a proper word to be used in the presence of ladies. [M. Schele De Vere, "Americanisms," 1872]

c. 1300, "district with its own church; members of such a church," from Anglo-French paroche, parosse (late 11c.), Old French paroisse, from Late Latin parochia, paroecia "a diocese," an alteration of Late Greek paroikia "a diocese or parish," from paroikos "a sojourner" (in Christian writers), in classical Greek, "neighbor," from para- "near" (see para- (1)) + oikos "house" (from PIE root *weik- (1) "clan").

The sense development of the word in the early Church is unclear, perhaps it is from "sojourner" used as epithet of early Christians as spiritual sojourners in the material world. In early Church writing the word was used in a more general sense than Greek dioikesis, though by 13c. they were synonymous. It replaced Old English preostscyr, literally "priest-shire." In Great Britain (from the 1630s), some southern American colonies, and Louisiana it has been the name for a purely civil division for purposes of local government, with boundaries originally corresponding to an ecclesiastical parish.

late 14c., "of or pertaining to a parish," from Anglo-French parochiel (early 14c.), from Old French parochial, from Late Latin parochialis "of a parish" (c. 600), from parochia (see parish).

Figurative sense, "limited, narrow," as if confined to a small region, is from 1856 (also see parochialism). Parochial school is attested from 1755.