adieu (interj.)
late 14c., adewe, from Old French a Dieu, a Deu, shortened from phrases such as a dieu (vous) commant "I commend (you) to God," from a "to" (see ad-) + dieu "God," from Latin deum, accusative of deus "god," from PIE *deiwos "god" (from root *dyeu- "to shine," in derivatives "sky, heaven, god"). Originally said to the party left (farewell was to the party setting forth), but in English used as a general parting salutation. As a noun, "expression of kind wishes upon departure," late 14c. Compare native parting salutation good-bye, a contraction of God be with ye.
Advertisement
adios (interj.)
1837, American English, from Spanish adios, from phrase a dios vos acomiendo "I commend you to God;" the French form is adieu (q.v.).
adjourn (v.) 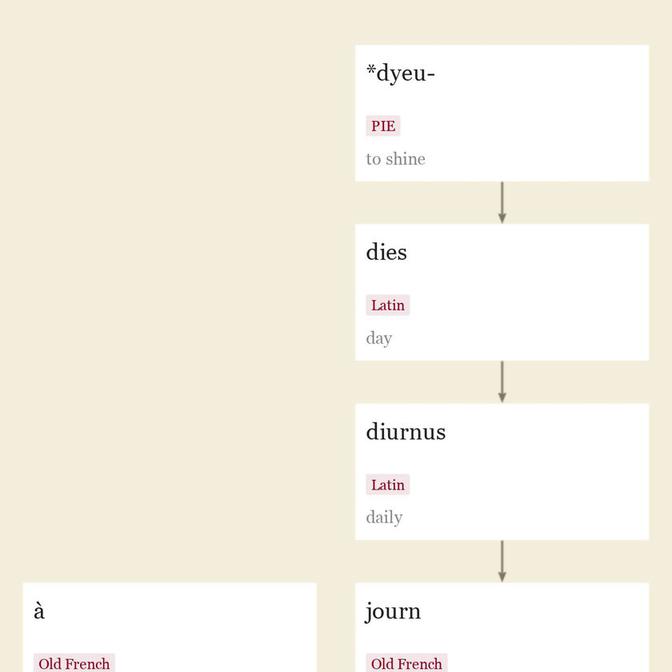 The notion is of setting a date for re-meeting. Meaning "to close a meeting" (with or without intention to reconvene) is from early 15c. Meaning "to go in a body to another place" (1640s) is colloquial. The English word has had the -d- since 16c., but the spelling is unetymological, as the compound apparently is not from Latin; Middle French also occasionally has adjourner, but this was rejected in Modern French. Related: Adjourned; adjourning.
Asmodeus
evil spirit, prince of demons, from Latin Asmodaeus, from Greek Asmodaios, from Talmudic Hebrew Ashmeday, from Avestan Aeshma-dæva, "Aeshma the deceitful," from aeshma "anger" (from PIE *eismo-, suffixed form of root *eis- (1), found in words denoting passion; see ire) + daeva- "spirit, demon" (from PIE *deiwos "god," from root *dyeu- "to shine," in derivatives "sky, heaven, god."
circadian (adj.)

coined 1959 by German-born biologist Franz Halberg, from Latin circa "about" (alternative form of circum "round about;" see circum-) + diem, accusative singular of dies "day" (from PIE root *dyeu- "to shine"). The original use is in circadian rhythm.

"belief in the existence of a personal God, generally accompanied by denial of revelation and the authority of a church," 1680s (deist is from 1620s), from French déisme, from Latin deus "god," from PIE root *dyeu- "to shine," in derivatives "sky, heaven, god."

A type of rationalistic theology that rose to prominence in England in the late 17c. and early 18c.; the deists advocated for the sufficiency of natural religion, apart from Scripture or revelation. Until c. 1700, the word was opposed to atheism; later it was the opposite of theism (q.v.), with which it is etymologically equivalent.

The term "deism" not only is used to signify the main body of the deists' teaching, or the tendency they represent, but has come into use as a technical term for one specific metaphysical doctrine as to the relation of God to the universe, assumed to have been characteristic of the deists, and to have distinguished them from atheists, pantheists and theists,—the belief, namely, that the first cause of the universe is a personal God, who is, however, not only distinct from the world but apart from it and its concerns. [Encyclopaedia Britannica, 1922]

c. 1300, deite, "divine nature, godhood, attributes of a god;" late 14c., "a god, God, the Supreme Being or self-existing spirit," from Old French deité, from Late Latin deitatem (nominative deitas) "divine nature," coined by Augustine from Latin deus "god," from PIE *deiwos "god," from root *dyeu- "to shine," in derivatives "sky, heaven, god." From 1580s as "a being to whom a divine or godlike nature is attributed."

formerly in English law, "a personal chattel which, having been the immediate cause of the death of a person, was forfeited to the Crown to be sold and the money applied to pious uses,"  1520s, from Anglo-French deodande (late 13c.), from Medieval Latin deodandum, from Deo dandum "a thing to be given to God," from dative of deus "god" (from PIE root *dyeu- "to shine," in derivatives "sky, heaven, god") + neuter gerundive of dare "to give" (from PIE root *do- "to give"). Abolished 1846.

Thus, if a cart ran over a man and killed him, the cart was by law forfeited as a deodand, and the coroner's jury was required to fix the value of the forfeited property. The pious object of the forfeiture was early lost sight of, and the king might and often did cede his right to deodands within certain limits as a private perquisite. [Century Dictionary]