It forms all or part of: cheese (n.2) "a big thing;" cue (n.1) "stage direction;" either; hidalgo; how; kickshaw; neither; neuter; qua; quality; quandary; quantity; quasar; quasi; quasi-; query; quib; quibble; quiddity; quidnunc; quip; quodlibet; quondam; quorum; quote; quotidian; quotient; ubi; ubiquity; what; when; whence; where; whether; which; whither; who; whoever; whom; whose; why.

It is the hypothetical source of/evidence for its existence is provided by: Sanskrit kah "who, which;" Avestan ko, Hittite kuish "who;" Latin quis/quid "in what respect, to what extent; how, why," qua "where, which way," qui/quae/quod "who, which;" Lithuanian kas "who;" Old Church Slavonic kuto, Russian kto "who;" Old Irish ce, Welsh pwy "who;" Old English hwa, hwæt, hwær, etc.
Related entries & more
pardon (v.)

'I grant you pardon,' said Louis XV to Charolais, who, to divert himself, had just killed a man; 'but I also pardon whoever will kill you.' [Marquis de Sade, "Philosophy in the Bedroom"]

Related: Pardoned; pardoning. Pardon me as a phrase used when making apology is by 1764; pardon my French as exclamation of apology for obscene language is by 1895.

also antiamerican, 1773, in reference to British parliamentary policies, from anti- + American. As a noun by 1788. Related: Anti-Americanism "opposition to what is distinctly American" (1844).

The term "anti-American" is a loose one, and loosely employed. My own working definition of it, admittedly a slack one also, is that a person is anti-American if he or she is consistently contemptuous of American culture and furthermore supports any opponent of U.S. policy, whoever this may be. [Christopher Hitchens, review of "The Life of Graham Greene, Vol. II," The Atlantic, March 2005] 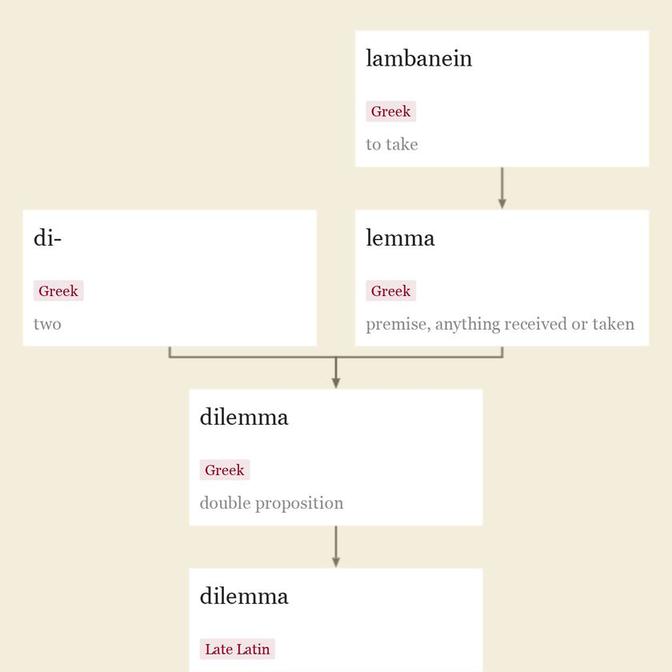 1520s in rhetoric (see below), from Late Latin dilemma, from Greek dilemma "double proposition," a technical term in rhetoric, from di- "two" (see di- (1)) + lemma "premise, anything received or taken," from root of lambanein "to take" (see lemma).

A form of argument in which it is shown that whoever maintains a certain proposition must accept one or other of two alternative conclusions, and that each of these involves the denial of the proposition in question. [Century Dictionary]

Loosely, "choice between two undesirable alternatives," from 1580s. It should be used only of situations where someone is forced to choose between two alternatives, both unfavorable to him (the alternatives are called the horns of a dilemma). But even logicians disagree on whether certain situations are dilemmas or mere syllogisms. Related: Dilemmatic.

mid-13c., honuren, "to do honor to, show respect to," from Old French onorer, honorer "respect, esteem, revere; welcome; present" (someone with something), from Latin honorare "to honor," from honor "honor, dignity, office, reputation" (see honor (n.)). From c. 1300 as "confer honors on." From c. 1300 as "to respect, follow" (teachings, etc.). In the commercial sense of "accept a bill due, etc.," it is recorded from 1706, via the notion of "perform a duty of respect toward." Related: Honored; honoring.

A custom more honoured in the breach than the observance. Whoever will look up the passage (Hamlet I. iv. 16) will see that it means, beyond a doubt, a custom that one deserves more honour for breaking than for keeping: but it is often quoted in the wrong & very different sense of a dead letter or rule more often broken than kept. [Fowler]