Also from mid-14c., "a pledge, guarantee, surety" (usually in plural), and (c. 1400) "a promise or pledge to meet in battle." The "payment for service" sense by late 14c. extended to allotments of money paid at regular intervals for continuous or repeated service. Traditionally in English wages were payment for manual or mechanical labor and somewhat distinguished from salary or fee. Modern French cognate gages (plural) means "wages of a domestic," one of a range of French "pay" words distinguished by class, such as traitement (university professor), paye, salaire (workman), solde (soldier), récompense, prix. The Old English word was lean, related to loan and representing the usual Germanic word (Gothic laun, Dutch loon, German Lohn). Wage-earner attested from 1871.
Related entries & more
wager (n.)
c. 1300, wajour "a promise, a vow, something pledged or sworn to;" also "a bet, a wager; stakes, something laid down as a bet," from Anglo-French wageure, Old North French wagiere (Old French gagiere, Modern French gageure) "pledge, security," from wagier "to pledge" (see wage (n.)).
Related entries & more
mortgage (n.) 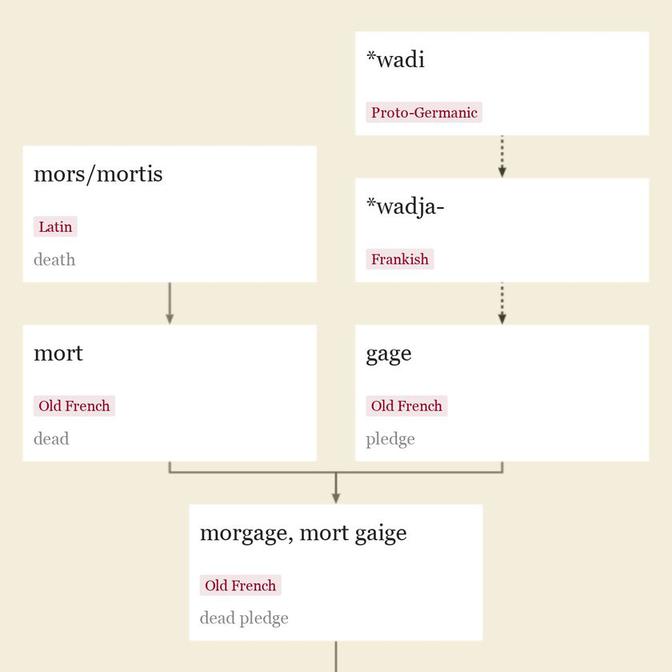 So called because the deal dies either when the debt is paid or when payment fails. Old French mort is from Vulgar Latin *mortus "dead," from Latin mortuus, past participle of mori "to die" (from PIE root *mer- "to rub away, harm," also "to die" and forming words referring to death and to beings subject to death). The -t- was restored in Modern English based on Latin.

And it seemeth, that the cause why it is called mortgage is, for that it is doubtful whether the feoffor will pay at the day limited such sum or not: and if he doth not pay, then the land which is put in pledge upon condition for the payment of the money, is taken from him for ever, and so dead to him upon condition, &c. And if he doth pay the money, then the pledge is dead as to the tenant, &c. [Coke upon Littleton, 1664]

also proletariate, "the lowest and poorest class," 1853, from French prolétariat, from Latin proletarius (see proletarian). In political economics, "indigent wage-earners, , the class of wage-workers dependent on daily or casual employment" from 1856. The Englished form proletary was used 16c.-17c. in the older sense and revived in the modern sense by 1865. The Leninist phrase dictatorship of the proletariat is attested from 1918. 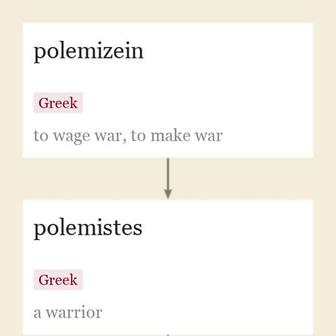 "one given to controversy," 1859, an American English formation parallel to polemist (1825), from Greek polemistēs "a warrior," from polemizein "to wage war, to make war," from polemos "war," a word of unknown origin.

"engage in controversial argument, carry on a controversy," 1953, from polemic + -ize. Related: Polemicized; polemicizing. Earlier was polemize (1828), from Greek polemizein "to make war, to wage war," from polemos "war," a word of unknown origin.