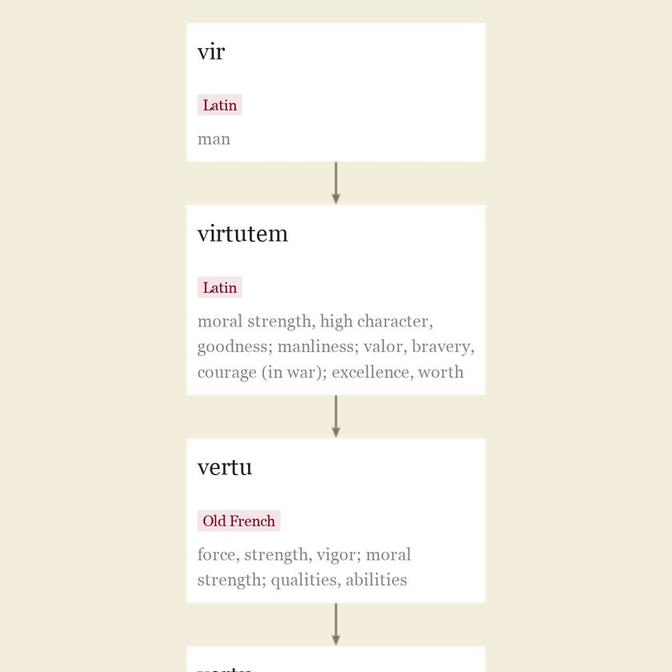 "excellence in an object of art, passion for works of art," 1722, from Italian virtu "excellence," from Latin virtutem (nominative virtus) "virtue, goodness, manliness" (see virtue). The same word as virtue, borrowed during a period when everything Italian was in vogue. Sometimes spelled vertu, as though from French, but this sense of the word is not in French.

late 14c., "influencing by physical virtues or capabilities, effective with respect to inherent natural qualities," from Medieval Latin virtualis, from Latin virtus "excellence, potency, efficacy," literally "manliness, manhood" (see virtue). The meaning "being something in essence or effect, though not actually or in fact" is from mid-15c., probably via sense of "capable of producing a certain effect" (early 15c.). Computer sense of "not physically existing but made to appear by software" is attested from 1959.

"seduced or corrupted from duty or virtue, vitiated in morals or purity of character," 1590s, past-participle adjective from debauch (v.). Related: Debauchedness.

"the instinct or virtue which directs a person's actions to the promotion of his own welfare," 1560s; see self- + love (n.). In early use especially "love of oneself, particularity to oneself."

"a secret, a mystery," proper singular form of arcana (q.v.); in alchemy, a supposed great secret of nature, hence, generally, "the secret virtue" of anything.