"pertaining to a bear," 1550s, from Latin ursinus "of or resembling a bear," from ursus "a bear," cognate with Greek arktos, from PIE *rtko- (see arctic).

"somewhat gray," 1590s, from grizzle "gray-colored" + -y (1). Also see grizzled. Grizzly bear (ursus horribilis) for the large ferocious bear of the western U.S., is recorded by 1806; sometimes said to belong rather to grisly (q.v.), but either adjective suits it.

1766, a misapplication to the European bison (Bos bison) of a word that actually refers to a species of wild cattle (Bos ursus) that went extinct early 17c.; from German Aurochs, from Old High German urohso, from uro "aurochs" (cognate with Old English ur, Old Norse ürr), which is of unknown origin, + ohso "ox" (see ox). Latin urus and Greek ouros are Germanic loan-words.

late 14c., artik, "of or pertaining to the north pole of the heavens," from Old French artique and directly from Medieval Latin articus, from Latin arcticus, from Greek arktikos "of the north," literally "of the (constellation) Bear," from arktos "bear;" also "Ursa Major; the region of the north," the Bear being the best-known northern circumpolar constellation.

This is from *rkto-, the usual Indo-European root for "bear" (source also of Avestan aresho, Armenian arj, Albanian ari, Latin ursus, Welsh arth). For speculation on why Germanic lost the word, see bear (n.). The -c- was restored from 1550s. 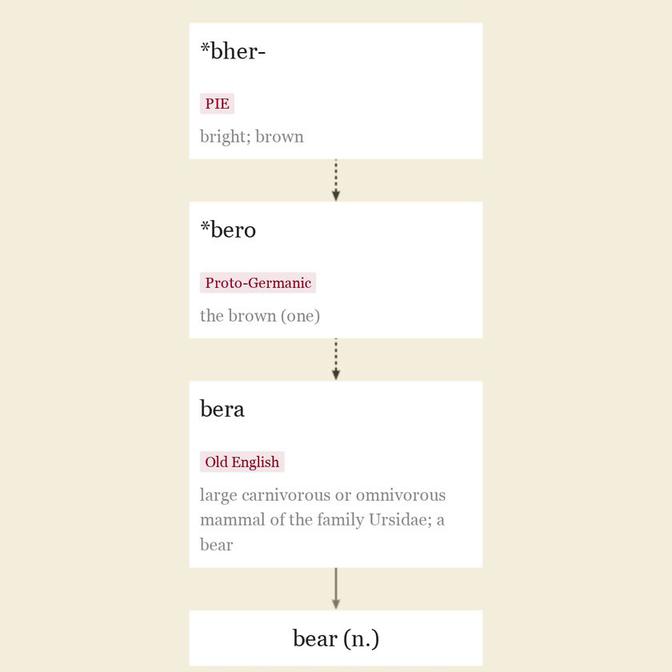