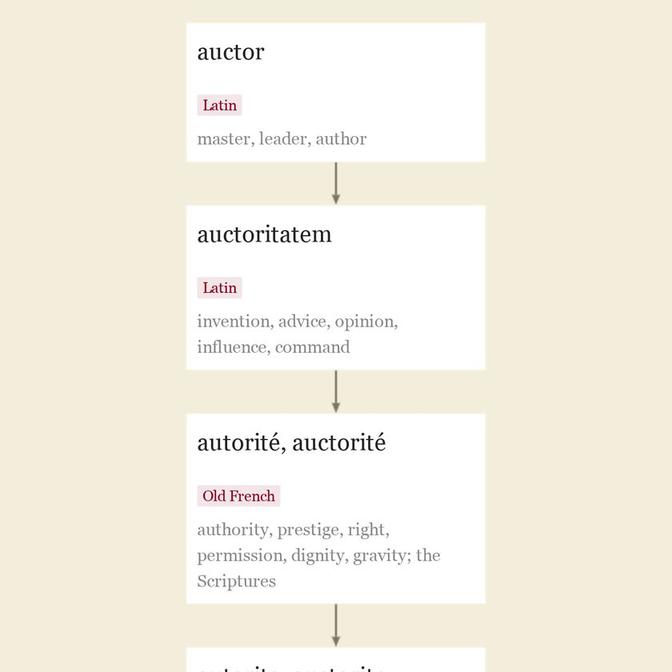 It usually was spelled with a -c- in English before 16c. but the letter was dropped in imitation of French, then with a -th-, probably by influence of authentic.

It is attested from c. 1300 in the general sense of "legal validity," also "authoritative doctrine" (opposed to reason or experience), also "author whose statements are regarded as correct." It is from mid-14c. as "right to rule or command, power to enforce obedience, power or right to command or act."

In Middle English it also meant "power derived from good reputation; power to convince people, capacity for inspiring trust." It is attested from c. 1400 as "official sanction, authorization." The meaning "persons in authority" is from 1610s; the authorities "those in charge, those with police powers" is recorded from mid-19c.

1956, slang shortening of traditional jazz. Its general slang use for "traditional" is recorded from 1963.

1580s, "a section of a long poem," used in Italian by Dante, in English first by Spenser, from Italian canto "song," from Latin cantus "song, a singing; bird-song," from past participle stem of canere "to sing" (from PIE root *kan- "to sing").

In medieval music, canto fermo (1789, from Italian, from Latin cantus firmus "fixed song") was the ancient traditional vocal music of the Church, so called because set by authority and unalterable. After time other voices were added above and below it.

traditional Japanese organized crime cartel, literally "eight-nine-three" (ya, ku, sa) the losing hand in the traditional baccarat-like Japanese card game Oicho-Kabu. The notion may be "good for nothing," or "bad luck" (such as that suffered by someone who runs afoul of them), or it may be a reference to the fact that a player who draws this hand requires great skill to win.

The meaning "having due authority, entitled to credence or obedience" is from 1650s; that of "proceeding from proper authority" is from 1809. Related: Authoritatively; authoritativeness.

"authority to command the national military forces," in extended use "an empire," 1650s, from Latin imperium "command, supreme authority, power" (see empire). Hence Latin phrase imperium in imperio "a state within a state."