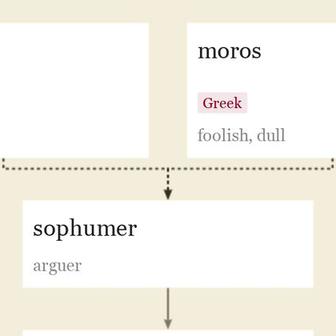 1680s, "student in the second year of university study," literally "arguer," altered from sophumer (1650s), from sophume, an archaic variant form of sophism, ultimately from Greek sophistēs "a master of one's craft; a wise or prudent man, one clever in matters of daily life."

The original reference of the "arguer" name might be to the dialectic exercises that formed a large part of education in the middle years. At Oxford and Cambridge, a sophister (from sophist with spurious -er as in philosopher) was a second- or third-year student (what Americans would call a "junior" might be a senior sophister).

Epimenides, the Cretan, says that all Cretans are liars.

But his statement is either true or not true.

Therefore he is a liar.

But since he is a liar, his statement is not true that all Cretans are liars.

Therefore some Cretans are not liars.

But since some Cretans are not liars, Epimenides is not necessarily a liar because he is a Cretan.

Therefore, we may accept his statement that all Cretans are liars. And so on.

large amphibious reptile, reptile of the order Crocodilia, 1560s, a respelling (to conform to Latin and French) of Middle English cokedrille, cocodril, kokedrille, etc. (c. 1300), from Old French cocodrille (13c.) and Medieval Latin cocodrillus, from classical Latin crocodilus, from Greek krokodilos, a word of unknown origin. According to Herodotus, it was an Ionic name for a kind of lizard, transferred to the crocodile. Beekes writes that "Frisk's etymology as a compound from [krokē] 'gravel' and [drilos] 'worm' (with dissimilation) should be forgotten."

The name later was extended to related species in India, the Americas, etc. The crocodile tears story, figurative of false or simulated grief, was in English from at least c. 1400. Related: Crocodilian; crocodiline.

The word also figures in logic, as the name of a sophism of counter-questioning.

Thus, in the old example, a crocodile has stolen a child, and promises to restore it to the father if the latter answers correctly his question, Am I going to restore child? If the father says Yes, the crocodile eats the child and tells the father he is wrong. If the father says No, the reply is that in that case the child cannot be restored, for to do so would violate the agreement, since the father's answer would then be incorrect. [Century Dictionary]