The figurative meaning "acute or penetrating in intellect or perception" was in Old English; hence "keenly alive to one's own interests, quick to take advantage" (1690s). Of words or talk, "cutting, sarcastic," from early 13c. Meaning "distinct in contour" is from 1670s. The musical meaning "half step above (a given tone)" is from 1570s. Meaning "stylish" is from 1944, hepster slang, from earlier general slang sense of "excellent" (1940). Phrase sharp as a tack first recorded 1912 (sharp as a needle has been around since Old English). Sharp-shinned attested from 1704 of persons, 1813 of hawks.

"state or character of being perspicacious; keenness of sight, clearness of understanding," 1540s, from French perspicacité (15c.) and directly from Late Latin perspicacitas "sharp-sightedness, discernment," from Latin perspicax "sharp-sighted, having the power of seeing through," from perspicere "look through, look closely at," from per "through" (from PIE root *per- (1) "forward," hence "through") + specere "look at" (from PIE root *spek- "to observe"). An earlier word was perspicience "ability to see all things, infinite vision" (c. 1400).

"short-sightedness," 1727, medical Latin, from Late Greek myōpia "near-sightedness," from myōps "near-sighted," literally "closing the eyes, blinking," on the notion of "squinting, contracting the eyes" (as near-sighted people do), from myein "to shut" (see mute (adj.)) + ōps (genitive ōpos) "eye" (from PIE root *okw- "to see"). By coincidence the name describes the problem: the parallel rays of light are brought to a focus before they reach the retina. 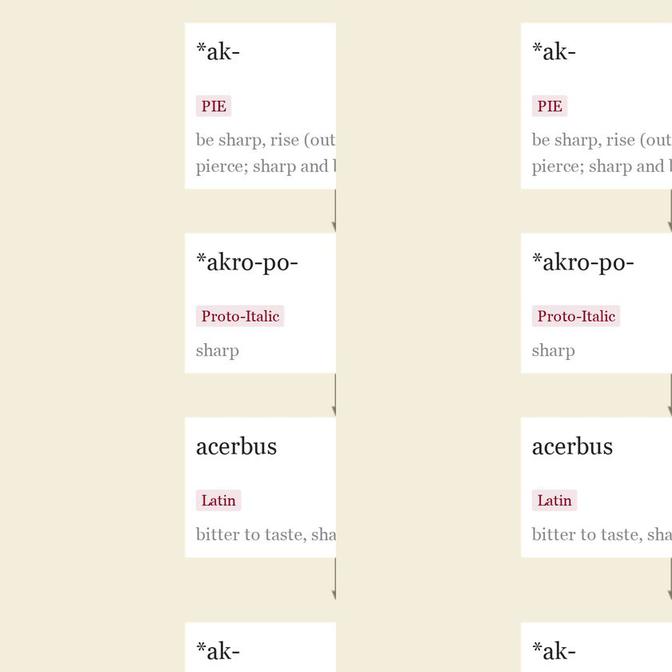 "sourness, with roughness or astringency of taste," 1570s, from French acerbité, from Latin acerbitatem (nominative acerbitas) "harshness, sharpness, bitterness, sourness," literal and figurative (as in virus acerbitatis "the poison of malice"), from acerbus "bitter to taste, sharp, sour, tart," from Proto-Italic *akro-po- "sharp" (from PIE root *ak- "be sharp, rise (out) to a point, pierce").

The earliest use in English is figurative, of "sharp and bitter" persons. Of tastes, from 1610s. Latin acerbus is related to acer "sharp" as superbus "haughty" to super "above."