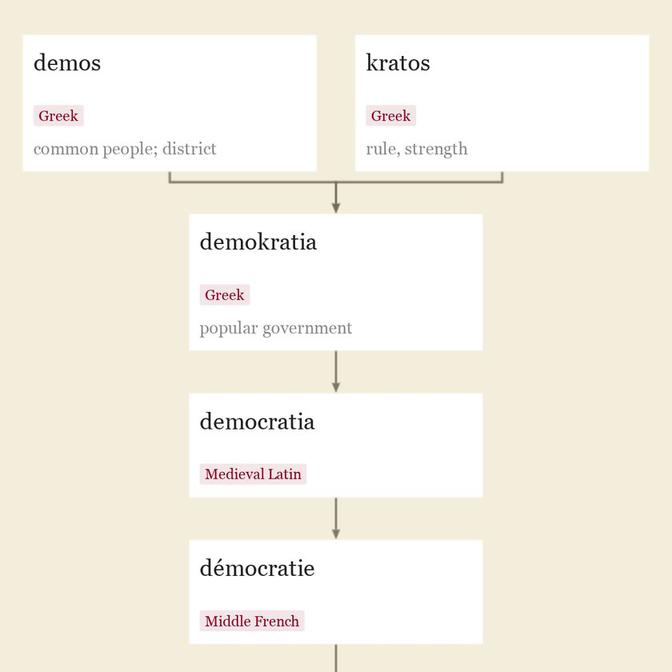 "government by the people, system of government in which the sovereign power is vested in the people as a whole exercising power directly or by elected officials; a state so governed," 1570s, from French démocratie (14c.), from Medieval Latin democratia (13c.), from Greek dēmokratia "popular government," from dēmos "common people," originally "district" (see demotic), + kratos "rule, strength" (see -cracy).

Sometimes 16c.-17c. in Latinized form democratie. In 19c. England it could refer to "the class of people which has no hereditary or other rank, the common people." In 19c. U.S. politics it could mean "principles or members of the Democratic Party."

Meaning "standing for others, acting as a substitute or agent for another" is from 1620s. Specifically in the political sense of "holding the place of, and acting for, a larger body of people in the government or legislature" it is recorded from 1620s; the meaning "pertaining to or founded on representation of the people, having citizens represented by chosen persons" is from 1640s. Related: Representatively (mid-15c.).

1630s, "member of a legislative body (such as the British House of Commons or the U.S. House of Representatives) who represents a number of others," from representative (adj.). By 1640s in the sense of "example, type, sample, specimen."

"sharing, having a share or part in common with others," 1833, from participate + -ory. Participatory democracy is attested by 1965, a term from student protests and mass demonstrations, contrasted with representative democracy. The formulation of the idea, if not the phrase, seems to trace to U.S. progressive political writer Walter Lippmann (1889-1974).

As a political faction name, from 1790 in reference to France. U.S. political usage (with a capital D) attested from c. 1800. The party originally was the Anti-Federal party, then the Democratic-Republican (Democratic for short). It formed among those opposed to extensive powers for the U.S. federal government. The name of the party was not formally shortened to Democratic until 1829. Democratic socialism is attested from 1849.

1790, "adherent or advocate of democracy," with reference to France, from French démocrate (18c., opposed to aristocrate), back-formation from démocratie (see democracy); formally revived in U.S. as a political party affiliation 1798, with a capital D. As a shortening of this, Demo (1793) is older than Dem (c. 1840). An earlier noun for "adherent of democracy" was democratian (1650s).

"government by the wealthy class; a class ruling by virtue of wealth," 1650s, from Greek ploutokratia "rule or power of the wealthy or of wealth," from ploutos "wealth" (see Pluto) + -kratia "rule" (see -cracy). Synonym plutarchy is slightly older (1640s). Pluto-democracy "plutocracy masquerading as democracy" is from 1895.

1705 as abbreviation of reputation (n.); upon rep "I swear it" was a common 18c. slang asseveration. As a shortening of repetition (n.) it is recorded from 1864, originally school slang; as a shortening of representative (n.), especially (but not originally) "sales representative," it is attested from 1896. As an abbreviation of repertory (company) it is recorded from 1925.