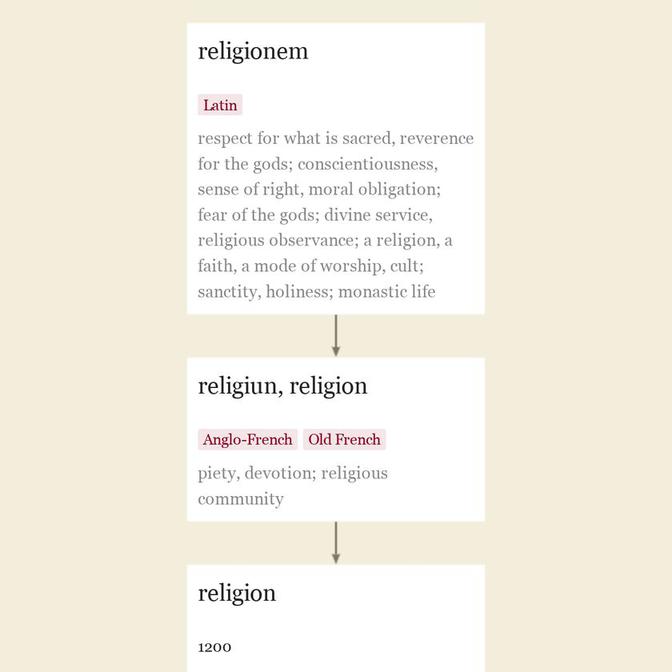 word-forming element used from late 19c. with a sense of "religious, pertaining to religion, of religion and," from Latin religio "a religion; holiness" (see religion).

The meaning "pertaining to religion" is from 1530s. The transferred sense of "scrupulous, exact, conscientious" is recorded from 1590s but restores or revives a sense right at home among the superstitious Romans. As a noun, from c. 1200 as "persons bound by vow to a religious order;" from late 14c. as "pious persons, the devout." Related: Religiousness.

It is come, I know not how, to be taken for granted, by many Persons, that Christianity is not so much as a Subject of Inquiry ; but that it is, now at length, discovered to be fictitious. And accordingly they treat it, as if, in the present Age, this were an agreed Point, among all People of Discernment; and nothing remained, but to set it up as a principal Subject of Mirth and Ridicule, as it were by Way of Reprisals, for its having so long interrupted the pleasures of the World. [Joseph Butler, introduction to "The Analogy of Religion," 1740]

The second element is not from religion, and the two words might not be related etymologically. From early 14c. as "improper or impious behavior." The transferred sense of "profanation of anything held sacred" is attested from late 14c.

"brought to light, disclosed," 1560s, past-participle adjective from reveal. Revealed religion, made known by direct divine agency, as opposed to natural religion, is attested from 1719.