late 14c., recreacioun, "refreshment or curing of a person, refreshment by eating," from Old French recreacion (13c.), from Latin recreationem (nominative recreatio) "recovery from illness," noun of action from past participle stem of recreare "to refresh, restore, make anew, revive, invigorate," from re- "again" (see re-) + creare "create" (from PIE root *ker- (2) "to grow"). Meaning "refresh oneself by some amusement" is first recorded c. 1400.

A verb recreate "to refresh by physical influence after exertion" is attested from 15c. and was used by Lyly, Pope, Steele, and Harriet Martineau, but it did not take, probably to avoid confusion to the eye with the recreate (re-create) that means "create anew." Hence also recreation (re-creation) "a new creation, regeneration" (early 15c.); "act of creating anew" (1520s).

"of or pertaining to recreation; used for or concerned with recreation," 1650s, from recreation + -al (1). Related: Recreationally. Recreational drug is attested from 1967.

"restore to a good or normal physical condition" after weakness or exhaustion, 1530s, from Latin recreatus, past participle of recreare "to refresh, restore, make anew" (see recreation (n.)). Earlier it meant "refresh or cheer" (late 15c.); the intransitive sense of "refresh oneself" is by 1520s; that of "take recreation" is by 1580s.

It is the hypothetical source of/evidence for its existence is provided by: Greek kouros "boy," korē "girl;" Latin crescere "come forth, spring up, grow, thrive, swell," Ceres, goddess of agriculture, creare "to bring forth, create, produce;" Armenian serem "bring forth," serim "be born."

"a roving, an act of wandering for recreation or pleasure," especially a leisurely walk in varying directions, 1650s, from ramble (v.).

The central idea of a pastime is that it is so positively agreeable that it lets time slip by unnoticed: as, to turn work into pastime. Amusement has the double meaning of being kept from ennui and of finding occasion of mirth .... Recreation is that sort of play or agreeable occupation which refreshes the tired person, making him as good as new. Diversion is a stronger word than recreation, representing that which turns one aside from ordinary serious work or thought, and amuses him greatly. [Century Dictionary, 1895] 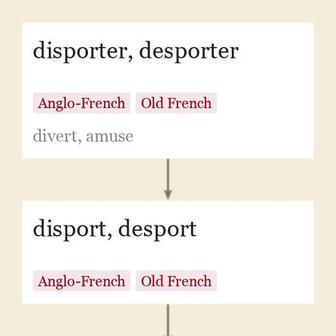