1701, "pleasure carriage," from French chaise "chair" (15c.), dialectal variant of chaire (see chair (n.)) due to 15c.-16c. Parisian accent swapping of -r- and -s-, a habit often satirized by French writers. French chair and chaise then took respectively the senses of "high seat, throne, pulpit" and "chair, seat," but this was after chair had been borrowed into English in the older sense.

Originally a one-horse, two-wheeled carriage for two persons, later extended to other types of pleasure or travelling carriages. Chaise lounge (1800) is corruption of French chaise longue "long chair," the second word confused in English with lounge.

Figurative sense of "seat of office or authority" c. 1300 originally was of bishops and professors. Meaning "office of a professor" (1816) is extended from the seat from which a professor lectures (mid-15c.). Meaning "seat of a person presiding at meeting" is from 1640s. As short for electric chair from 1900. Chair-rail "strip or board of wood fastened to a wall at such a height as to prevent the plaster from being scraped by the backs of chairs" is from 1822.

"a public address; a formal, vehement, or passionate address;" also "any formal or pompous speech; a declamation; a tirade," mid-15c., arang, Scottish (in English from c. 1600), from French harangue "a public address" (14c.), from Old Italian aringo "public square, platform; pulpit; arena," from a Germanic source such as Old High German hring "circle" (see ring (n.1)) on the notion of "circular gathering," with an -a- inserted to ease Romanic pronunciation of Germanic hr- (compare hamper (n.1)).

"pulpit or platform from which a speaker addresses an audience," 1540s, originally in an ancient Roman context, from Latin rostrum, the name of the platform stand for public speakers in the Forum in ancient Rome. It was decorated with the beaks of ships taken in the first naval victory of the Roman republic, over Antium, in 338 B.C.E., and the Latin word's older sense is "end of a ship's prow," literally "beak, muzzle, snout," originally "means of gnawing," an instrument noun from rodere "to gnaw" (see rodent).

The beaks were an ancient form of ram, a beam spiked with pointed iron for the purpose of sinking other vessels. For the form, compare claustrum "lock, bar," from claudere "to shut." The extended sense, in reference to any platform for public speaking, is attested by 1766.

The classical plural is rostra, though in English this is more common in the original "ship's beak" sense and -rums often is used in the secondary sense. 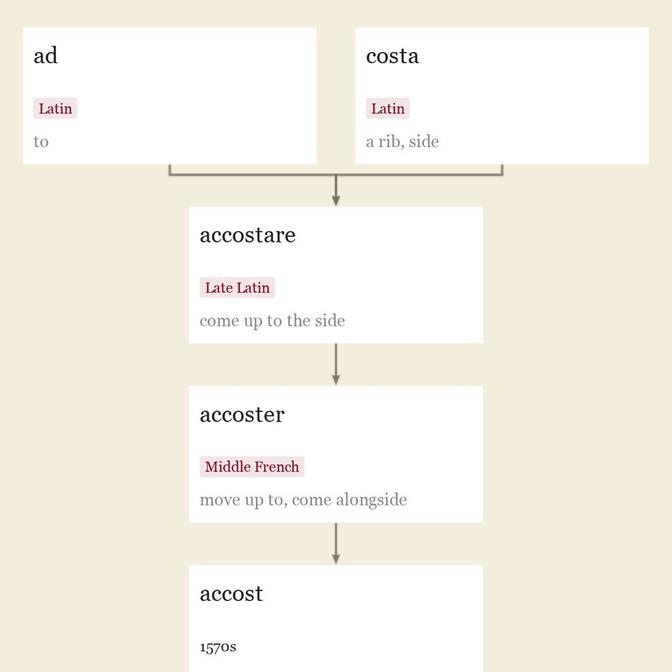 Meaning "particular variety of food served in a dish" is first recorded mid-15c. Meaning "what one likes, what is suited to one's taste" is by 1918; that of "attractive woman" is 1920s. Meaning "concave reflector or antenna" attested from 1948.

Originally applied to very shallow or flat vessels, as plates and platters, the term now usually includes any large open vessel, more or less deep, and with or without a cover, used to contain food or table-drink such as tea, coffee, or chocolate. The use of the term to include drinking-vessels, as bowls and cups, is less common, and seems to be obsolescent, except as such vessels are included in the collective plural dishes. [Century Dictionary, 1897]

"one who lacks courage to meet danger or shrinks from the chance of being hurt," mid-13c., from Anglo-French couard, couart, Old French coart "coward" (no longer the usual word in French, which has now in this sense poltron, from Italian, and lâche), from coe "tail," from Latin coda, popular dialect variant of cauda "tail" (see coda) + -ard, an agent noun suffix denoting one that carries on some action or possesses some quality, with derogatory connotation (see -ard).

The word probably reflects an animal metaphoric sense still found in expressions like turning tail and tail between legs. Coart was the name of the hare in Old French versions of "Reynard the Fox." Italian codardo, Spanish cobarde (Old Spanish couarde) are from French. The spelling in English was influenced by cow (v. and n.).

[S]o strong is the false belief that every bully must be a coward that acts requiring great courage are constantly described as cowardly or dastardly if they are so carried out as not to give the victim a sporting chance; the throwing of a bomb at a king's carriage is much less dastardly than shooting a partridge, because the thrower takes a very real risk .... [Fowler]

As a surname (attested from mid-13c.) it represents Old English cuhyrde "cow-herd." As an adjective, "lacking courage, timorous," from late 13c. Farmer has coward's castle "a pulpit," "Because a clergyman may deliver himself therefrom without fear of contradiction or argument."