late 14c., propiciacioun, "atonement, expiation," from Late Latin propitiationem (nominative propitiatio) "an atonement," noun of action from past-participle stem of Latin propitiare "appease, propitiate," from propitius "favorable, gracious, kind, well-disposed." The current explanation of this (as of de Vaan) is that it represents *propre-tio-, from PIE *propro "on and on, ever further" (source also of Sanskrit pra-pra "on and on," Greek pro-pro "before, on and on"), from root *per- (1) "forward," hence "in front of, toward, near." It is thus related to Latin prope "near."

Earliest recorded form of the word in English is propitiatorium "the mercy seat, place of atonement" (c. 1200), translating Greek hilasterion. The meaning "that which propitiates or appeases, a propitiatory gift or offering" is from 1550s.

1510s, "condition of being at one (with others)," a sense now obsolete, from atone + -ment. The theological meaning "reconciliation" (of man with God through the life, passion, and death of Christ) is from 1520s; that of "satisfaction or reparation for wrong or injury, propitiation of an offended party" is from 1610s. 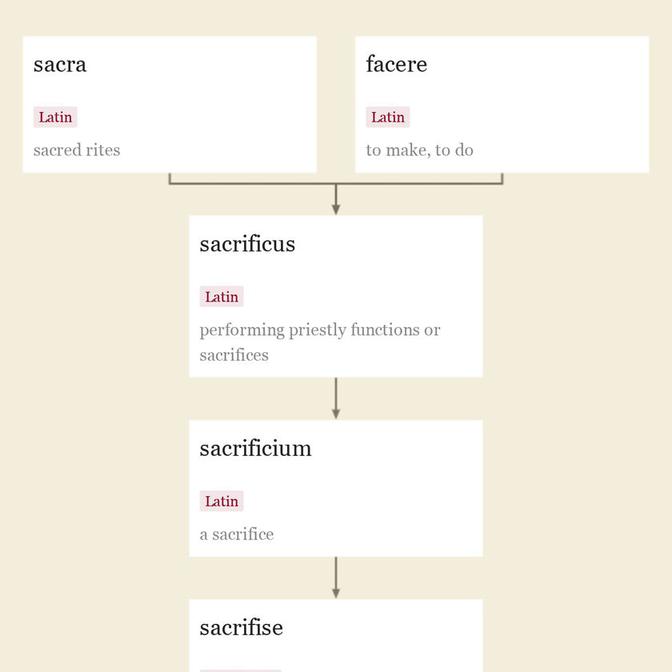 late 13c., "the offering of something (especially a life) to a deity as an act of propitiation, homage, etc.;" mid-14c., "that which is offered (to a deity) in sacrifice," from Old French sacrifise "sacrifice, offering" (12c.), from Latin sacrificium, from sacrificus "performing priestly functions or sacrifices," etymologically "a making sacred," from sacra "sacred rites" (properly neuter plural of sacer "sacred;" see sacred) + combining form of facere "to make, to do" (from PIE root *dhe- "to set, put").

Originally especially of Christ's propitiatory offering of himself for the world. Latin sacrificium is glossed in Old English by ansegdniss. The general sense of "act of giving up a desirable thing for a higher object or to a more pressing claim," also "something given up for the sake of another" is recorded from 1590s. Baseball sense of "hit made by the batter not to get himself to base but to enable another player to advance" is by 1880.