1928, in reference to galaxies as presently understood, from inter- + galactic. The word itself was in use by 1901, when galaxies were thought to be a sort of nebulae.

type of wrestling hold, 1875, apparently from a proper or surname, but no one now knows whose.

Presently, Stubbs, the more skilful as well as the more powerful of the twain, seizes the luckless Jumper in a terrible gripe, known to the initiated as the Full Nelson. ["Lancashire Recreations," in Chambers's Journal, April 24, 1875]

Sense of "presently in effect" is from mid-15c. Meaning "prevalent, generally reported or known" is from 1560s; that of "established by common consent" is from 1590s; that of "now passing, present now, in progress" is from c. 1600. Of money, "passing from one person to another," late 15c. Current events is attested from 1795; current affairs by 1776. 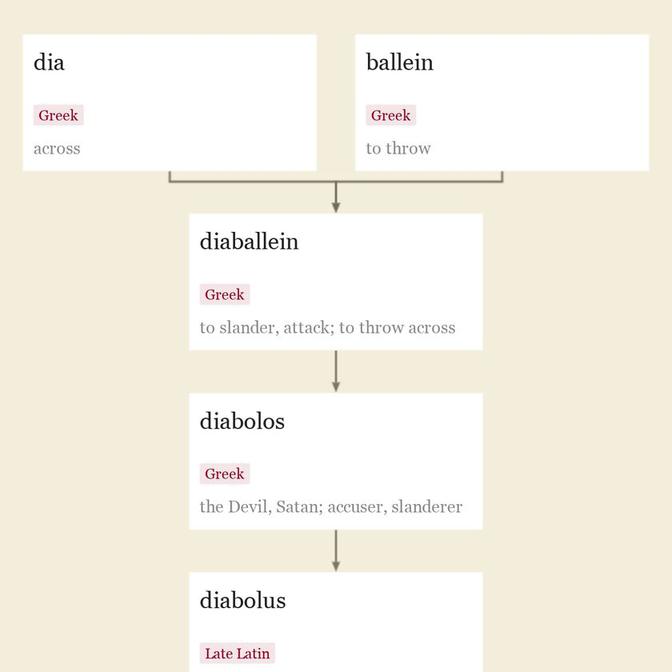 Meaning "elated by some act, fact, or thing" is from mid-13c. The sense of "of fearless or untamable spirit" is by c. 1400; that of "ostentatious, grand, giving reason for pride" is by mid-14c. To do (someone) proud is attested by 1819. The surname Proudfoot is attested from c. 1200 (Prudfot). A Middle English term for "drunk and belligerent" was pitcher-proud (early 15c.).

The sense of "having a high opinion of oneself," not found in Old French, might reflect the Anglo-Saxons' opinion of the Norman knights who called themselves "proud." Old Norse pruðr, either from the same French source or borrowed from Old English, had only the sense "brave, gallant, magnificent, stately" (compare Icelandic pruður, Middle Swedish prudh, Middle Danish prud).

Likewise a group of "pride" words in the Romance languages — such as French orgueil, Italian orgoglio, Spanish orgullo — are borrowings from Germanic, where they had positive senses (Old High German urgol "distinguished").

Most Indo-European languages use the same word for "proud" in its good and bad senses, but in many the bad sense seems to be the earlier one. The usual way to form the word is by some compound of terms for "over" or "high" and words for "heart," "mood," "thought," or "appearance;" such as Greek hyperephanos, literally "over-appearing;" Gothic hauhþuhts, literally "high-conscience." Old English had ofermodig "over-moody" ("mood" in Anglo-Saxon was a much more potent word than presently) and heahheort "high-heart."

Words for "proud" in other Indo-European languages sometimes reflect a physical sense of being swollen or puffed up; such as Welsh balch, probably from a root meaning "to swell," and Modern Greek kamari, from ancient Greek kamarou "furnish with a vault or arched cover," with a sense evolution via "make an arch," to "puff out the chest," to "be puffed up" (compare English slang chesty).