mid-15c., prescriben, "to write down as a direction, law, or rule," from Latin praescribere "write before, prefix in writing; ordain, determine in advance," from prae "before" (see pre-) + scribere "to write" (from PIE root *skribh- "to cut"). Related: Prescribed; prescribing. Medical sense of "advise, appoint, or designate as a remedy for a disease" is from 1580s, probably a back formation from prescription.

"inalienable, not subject to law or convention," 1560s, from French imprescriptible (16c.) or a native formation from assimilated form of in- (1) "not, opposite of" + Latin praescriptus, past participle of praescribere "to write beforehand, determine in advance, ordain, dictate" (see prescribe). Usually with right (n.). Related: Imperscriptibility. Alternative imprescribable is attested from 1887.

It is the hypothetical source of/evidence for its existence is provided by: Greek skariphasthai "to scratch an outline, sketch;" Latin scribere "to write" (to carve marks in wood, stone, clay, etc.); Lettish skripat "scratch, write;" Old Norse hrifa "scratch."

1590s, "to practice dictation, say aloud for another to write down," from Latin dictatus, past participle of dictare "say often, prescribe," frequentative of dicere "to say, speak" (from PIE root *deik- "to show," also "pronounce solemnly"). Sense of "to command, declare, or prescribe with authority" is 1620s, as is the meaning "be the determining cause or motive of." Related: Dictated; dictates; dictating. 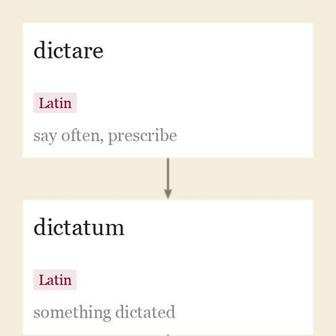 1650s, "authoritative utterance," from Late Latin dictationem (nominative dictatio) "a dictating, dictation," noun of action from past-participle stem of dictare  "say often, prescribe," frequentative of dicere "to say, speak" (from PIE root *deik- "to show," also "pronounce solemnly"). Meaning "act or practice of expressing orally for another to write down" is by 1727.

In Latin, a dictator was a judge in the Roman republic temporarily invested with absolute power; this historical sense was the original one in English. The transferred sense of "absolute ruler, person possessing unlimited powers of government" is from c. 1600; that of "one who has absolute power or authority" of any kind, in any sphere is from 1590s.

c. 1400, reportour, "one who gives an account" of what was said or done by another (common 16c.-17c. in this general sense; often pejorative, "a tale-bearer"), agent noun from report (v.), or from Old French reporteur (Modern French rapporteur).

From 1610s as "one who takes down reports of law cases." In the journalistic sense, "member of the staff of a newspaper whose work is to collect information and submit it to the editors in the form they prescribe," from 1798 (from 1797 as the name of a newspaper). French reporter in this sense is a 19c. borrowing from English.