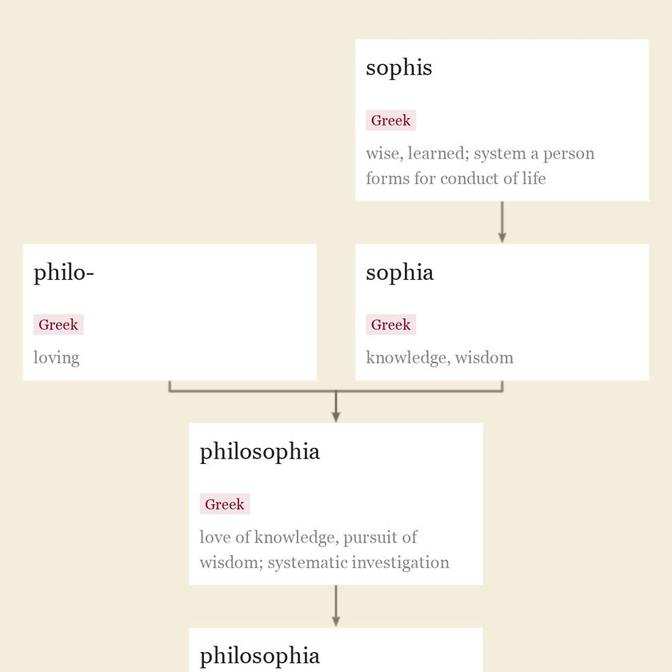 From mid-14c. as "the discipline of dealing in rational speculation or contemplation;" from late 14c. as "natural science," also "alchemy, occult knowledge;" in the Middle Ages the word was understood to embrace all speculative sciences. The meaning "system a person forms for conduct of life" is attested from 1771. The modern sense of "the body of highest truth, the science of the most fundamental matters" is from 1794.

In 1744 he made an unsuccessful attempt to obtain a professorship at Edinburgh; having failed in this, he became first a tutor to a lunatic and then secretary to a general. Fortified by these credentials, he ventured again into philosophy. [Bertrand Russell, writing of Hume, in "A History of Western Philosophy," 1945]

"a would-be philosopher," a disparaging term for a rationalist or skeptic, a philosophe; 1798, from French philosophiste; see philosophy + -ist.

"to think and reason about the subjects of philosophy; to meditate upon the fundamental principles of being or knowledge," 1590s, from philosophy + -ize. Related: Philosophized; philosophizing. The earlier verb was simply philosophy (late 14c., philosophien).

attested from 1869; abbreviation of Latin Philosophiae Doctor "Doctor of Philosophy."

"pertaining with or imbued with the philosophy of determinism," 1845, from determinist (see determinism) + -ic.