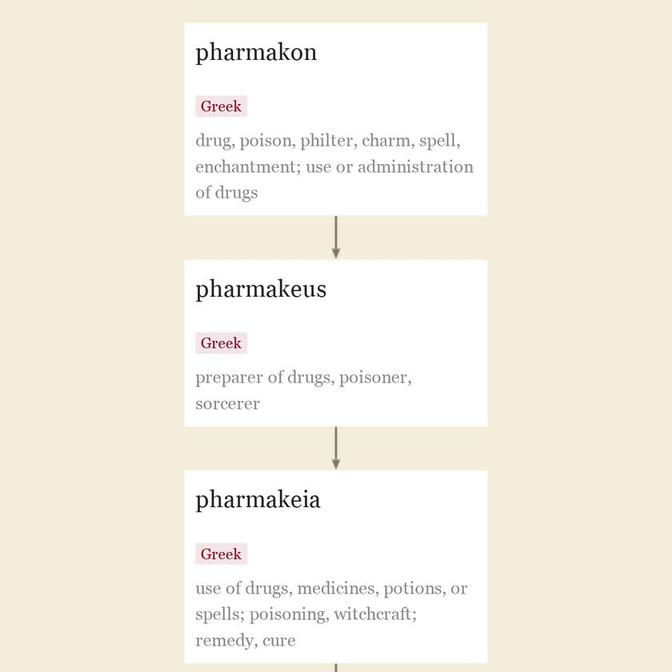 "a druggist, apothecary, one skilled in pharmacy," 1811; see pharmacy + -ist. Replaced obsolete pharmacian (1720). Pharmaceutist in this sense is attested from 1785. The Latin word was pharmacopola, the Greek pharmakopoles.

"the sum of scientific knowledge concerning drugs," 1721, formed in Modern Latin (1680s) from pharmaco- (see pharmacy) + -logy. It includes pharmacy (the art of preparing drugs) and also pharmacodynamics (what is known concerning their action). Related: Pharmacological.

"pertaining to pharmacy or the art of preparing drugs," 1640s (pharmaceutic in the same sense is from 1540s), from Late Latin pharmaceuticus "of drugs," from Greek pharmakeutikos, from pharmakeus "preparer of drugs, poisoner" (see pharmacy). Pharmaceuticals "medicinal drugs" is attested by 1881. Related: Pharmaceutically.

1570s, "forming part of the accepted course of teaching," a sense now obsolete, from Latin magistralis "of a master," from magister "chief, director" (see master (n.)). Meaning "authoritative; of, pertaining to, or befitting a master" is from c. 1600. In pharmacy, of a remedy, etc., "devised by a physician for a particular case, prepared for the occasion" (c. 1600).

A soda-jerk (1915; soda-jerker is from 1883) is so called for the pulling motion required to work the taps.

Who draweth off the moistened air with nimble turn and jerk,