"a standard, pattern, or model," 1821 (Coleridge), from French norme, from Latin norma "carpenter's square, rule, pattern," a word of unknown origin. Klein suggests a borrowing (via Etruscan) of Greek gnōmōn "carpenter's square." The Latin form of the word, norma, was used in English in the sense of "carpenter's square" from 1670s, also as the name of a small, faint southern constellation introduced 18c. by La Caille.

"establishing or setting up a norm or standard which ought to be followed," 1880, perhaps from French normatif, from Latin norma "rule" (see normal).

"insistence upon legitimacy," 1849, from French légitimisme (1834); see legitimate (adj.) + -ism. In 19c. especially with reference to French or Spanish politics and conservative adherence to "legitimate" claimants to the throne.

Allegiance ... is a matter of principle, and applies especially to conduct; the oath of allegiance covers conduct only. Loyalty is a matter of both principle and sentiment, conduct and feeling; it implies enthusiasm and devotion .... [Century Dictionary, 1897] 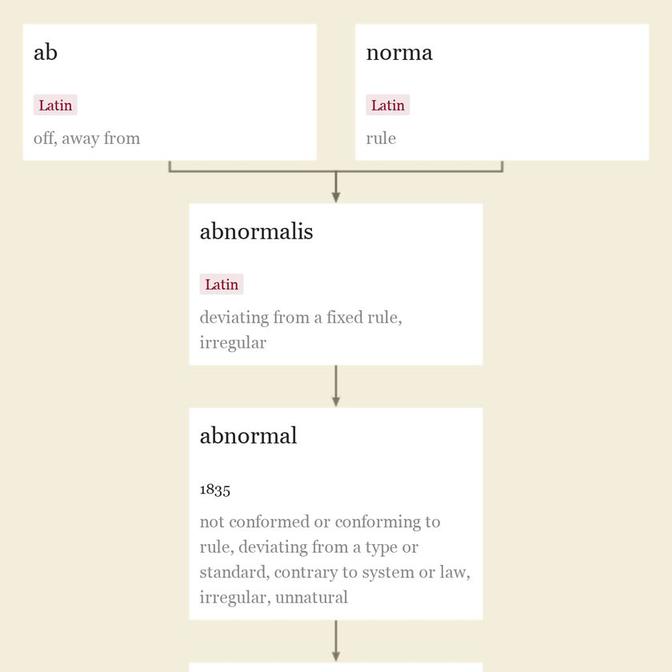 The older form was from French anormal (13c.), from Medieval Latin anormalus, an altered (by association with norma) borrowing of Greek anomalos "uneven, irregular," from an- "not" (see an- (1)) + homalos "even," from homos "same" (from PIE root *sem- (1) "one; as one, together with"). Compare anomaly. "Few words show such a series of pseudo-etymological perversions" [Weekley]. Another adjective was abnormous (1742) "irregular, misshapen," from Latin abnormis. Related: Abnormally.