late 14c., mummie, "medicinal substance prepared from mummy tissue," from Medieval Latin mumia, from Arabic mumiyah "embalmed body," from Persian mumiya "asphalt," from mum "wax." Sense of "dead human body embalmed and dried after the manner of the ancient Egyptians" is recorded in English from 1610s. Mummy wheat (1842), grown in Egypt and Ethiopia and once thought to be a distinct species, was said to have been cultivated from grains found in mummy-cases.

1784, a childish alteration of mammy. Alternative form mumsy attested by 1876.

pet word for "mother," 1823, short for mummy (see mamma). In British sociology, used from 1957 in reference to "the working class mother as an influence in the lives of her children." Also sometimes a vulgar corruption of madam or ma'am.

The sense of "lean, emaciated person" is by 1620s. The meaning "bare or mere outline, rough draft" is recorded by c. 1600; that of "supporting framework" of anything is by 1650s, hence skeleton key (by 1810). The meaning "of the minimum size for getting work done" is by 1778, originally military; hence skeleton crew (1891), Phrase skeleton in the closet "source of secret shame to a person or family" is from 1812 (the image is perhaps from the Bluebeard fable). 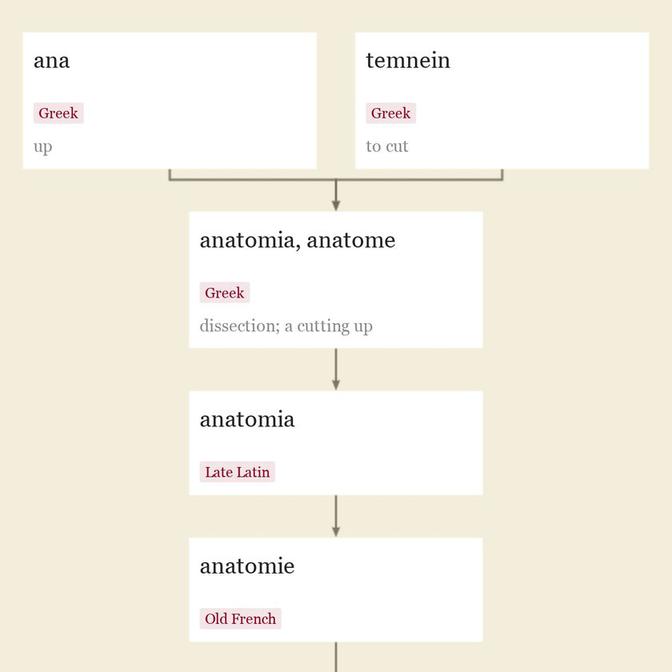 late 14c., "study or knowledge of the structure and function of the human body" (learned by dissection); c. 1400, "anatomical structure," from Old French anatomie and directly from Late Latin anatomia, from late Greek anatomia for classical anatomē "dissection," literally "a cutting up," from ana "up" (see ana-) + temnein "to cut" (from PIE root *tem- "to cut").

Probably a natural sound in baby-talk, perhaps imitative of sound made while sucking. Its late appearance in English is curious, but Middle English had mome (mid-13c.) "an aunt; an old woman," also an affectionate term of address for an older woman.