Advertisement
all
word
name
phrase
suffix
prefix
word root
15 entries found.
lop (v.1)
"to cut off," originally of branches of a tree, mid-15c. (implied in lopped; place name Loppedthorn is attested from 1287), a verb from Middle English loppe (n.) "small branches and twigs trimmed from trees" (early 15c.), which, along with Medieval Latin loppa, is of unknown origin. Related: Lopping.
Related entries & more
Advertisement
lop (v.2)
"droop, hang loosely," as do the ears of certain dogs and rabbits, 1570s, probably a variant of lob or of lap (v.); compare lopsided (1711), which in early use also was lapsided. Lop-eared attested from 1680s. Related: Lopped; lopping.
Related entries & more
lopsided (adj.)
also lop-sided, "leaning to one side as a result of being disproportionately balanced," 1711 (lapsided), first used of ships; from lop (v.2) + side (n.). Related: Lopsidedly; lopsidedness.
Related entries & more
mutilation (n.)

1520s, in Scots law, "act of disabling or wounding a limb," from French mutilation and directly from Late Latin mutilationem (nominative mutilatio), noun of action from past-participle stem of Latin mutilare "to cut or lop off," from mutilus "maimed," which is of uncertain etymology. Of things, "a destroying of unity by damaging or removing a part," from 1630s. 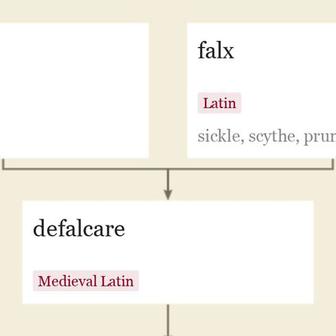 1530s, "to lop off, take away or deduct a part of," from Medieval Latin defalcatus, past participle of defalcare, from de "off, away" (see de-) + Latin falx, falcem "sickle, scythe, pruning hook" (see falcate). Modern scientific use dates from 1808.

1630s, "to cut off a limb," originally in English both of plants and persons; a back-formation from amputation or else from Latin amputatus, past participle of amputare "to cut off, lop off; cut around, to prune," from am(bi)- "around" (from PIE root *ambhi- "around") + putare "to prune, trim" (from PIE root *pau- (2) "to cut, strike, stamp"). Related: Amputated; amputating.

1610s, "a cutting off of tree branches, a pruning," also "operation of cutting off a limb, etc., of a body," from French amputation or directly from Latin amputationem (nominative amputatio), noun of action from past-participle stem of amputare "to cut off, lop off; cut around, to prune," from am(bi)- "around" (from PIE root *ambhi- "around") + putare "to prune, trim" (from PIE root *pau- (2) "to cut, strike, stamp").

late 14c., prouynen, proinen, of a bird, "to trim the feathers with the beak;" of a person, "to dress or groom oneself carefully," from an extended or transferred sense of Old French proignier, poroindre "cut back (vines), prune" (Modern French provigner), a word of unknown origin. Compare preen, which seems to be a variant of this word that kept the original senses.

The main modern sense of "lop superfluous twigs or branches from" is from 1540s, perhaps a separate borrowing of the French word. It is earlier in English in a general sense of "lop off as superfluous or injurious" (early 15c.).

Perhaps [Watkins] from Gallo-Roman *pro-retundiare "cut in a rounded shape in front," from pro "forth" (see pro-) + *retundiare "round off," from Latin rotundus (see round (adj.)). Klein suggests the Old French word is from provain "layer of a vine," from Latin propago (see prop (n.1)).