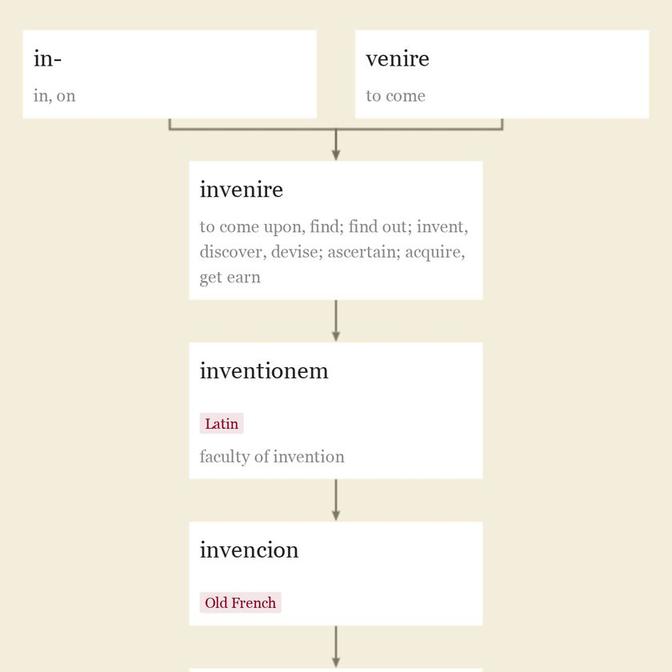 also re-invention, "a new or second or repeated invention," 1719, from re- "back, again" + invention or else formed as a noun to go with reinvent.

c. 1500, "to find, discover" (obsolete), a back-formation from invention or else from Latin inventus, past participle of invenire "to come upon; devise, discover."

The general sense of "make up, fabricate, concoct, devise" (a plot, excuse, etc.) is from 1530s, as is that of "produce by original thought, find out by original study or contrivance." Related: Invented; inventing.

The form was altered in Medieval Latin by influence of words in -orium, which became very common in post-classical and Christian use. It properly belongs with words in -ary, and French has corrected the spelling. Related: Inventorial; inventorially.
Related entries & more
Advertisement
b.o. (n.)
by c. 1950, an abbreviation of body odor; an advertisers' invention.
Related entries & more
gel (n.)

"semi-solid substance," 1899, as a chemical term, short for gelatin and perhaps influenced by jell. The invention of this word is credited to Scottish chemist Thomas Graham. Hair-styling sense is from 1958.

also re-invent, "invent again or anew," 1680s, from re- "again" + invent (v.). Especially "devise or create anew without knowledge of a previous invention;" phrase reinvent the wheel "do redundant work" is attested by 1971. Related: Reinvented; reinventing.

1670s, "to obtain right to land" by securing letters patent, from patent (n.). The meaning "obtain a copyright to an invention" is recorded by 1822, from the earlier meaning "obtain exclusive right or monopoly" (1789), a privilege granted by the Crown via letters patent. Related: Patented; patenting.

Related entries & more
telephonic (adj.)
1830, "pertaining to communication by sound over great distances," originally theoretical, from tele- + phonic. From 1834 in reference to the system of Sudré using musical sounds (see telephone), and with reference to Bell's invention from 1876, in which cases it can be taken as from telephone + -ic.
Related entries & more
Next
Advertisement